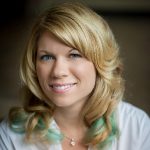 A writer by day and a mother by night, Morgan L. Busse is the author of the Follower of the Word series and the steampunk series The Soul Chronicles. The first novel in her fantasy series The Ravenwood Saga, Mark of the Raven, won the 2019 Carol Award and the 2019 INSPY Award.

“I’m always drawing inspiration from history, cultures, and civilizations. As a world-builder, I find it helpful to look at how our own world came to be, and then use that as inspiration for my novels. For example, in my Ravenwood series, I based the Dominia Empire on Genghis Khan and the Mongol Empire. I studied how he led his people, how he inspired his people to fight, and how he went about conquering the lands. In my steampunk novels, I use a lot of pieces from the Victorian era to shape my worlds—from the rise of science during that time period, to the clothing styles, to modes of transportation (both real and made up). I find combining something familiar and my own imagination helps ease the reader into my worlds.” 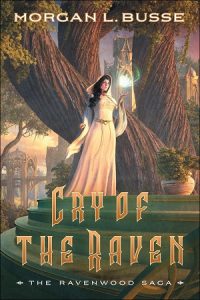 Cry of the Raven
The Ravenwood Saga #3
Morgan L. Busse
Bethany House
Buy the book from our store!

Wife. Warrior. Lady of Two Worlds. As War Looms, Will Her Power Be Enough to Save the Ones She Loves?

Lady Selene Ravenwood has come into her full power as a dreamwalker—a power greater than any in history. She embraces her new role as Nightwatcher, able to intercede for her people in the dream world, but the dark shadow of war draws ever closer.

Working together, the Great Houses come up with a plan to secure the borders from the approaching Dominia Empire. But dissension, conflict, and suspicion threaten to destroy their tenuous treaty, and as the empire burns a path across their lands, Damien Maris starts to lose his ability to raise the waters, leaving the lands vulnerable to the empire’s attacks.

The only one who can keep the Great Houses unified and restore her husband’s power is Selene. But it will require that she venture deep into the dream world to confront the enemies of her past who will do anything to stop her power. Will it be enough, or will both worlds fall under the empire’s might?