The winner of the Clive Staples Award, Bryan Davis writes “fantasy, adventure, and mystery suitable for your entire family.” He’s the author of several speculative fiction series, including Dragons in Our Midst, Oracles of Fire, Children of the Bard, The Reapers Trilogy, The Time Echoes Trilogy, Tales of Starlight, and Dragons of Starlight.

“The books are about people—their struggles, their victories, their defeats, their courage and their faith.” 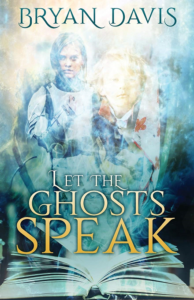 Let the ghosts speak—but will the sane heed their counsel?

In 19th century Paris, Justin Trotter, an immigrant from England, is making his way as a book translator while paying for his blind twin sister’s care. One evening, Marc Noël, Justin’s well-to-do friend and fellow thespian, invites him to a masquerade party at an abandoned schoolhouse. Justin hopes this will be an opportunity to get to know Marc’s lovely though sharp-tongued sister, Francine.

At the event, Justin meets four ghostly strangers—two adults and two children—who warn him that the party guests are in danger, and they must leave at once. True to their prediction, a murder takes place, and Justin is the prime suspect. He escapes and becomes a fugitive, hiding in the Paris catacombs.

Mystery and intrigue swirl as the ghost of Joan of Arc and other martyrs guide Justin on a lonely journey to prove his innocence and protect his sister from an abusive caretaker. Who really committed the crime? Marc? Francine? A ghost? And does seeing these ghosts mean he is going insane? Maybe he really is the murderer after all.

There is only one way to find out, to let the ghosts speak as they reveal the mysteries within Justin’s mind.