Wanda E. Brunstetter’s next big hit won’t be on bookshelves–but onstage. The Amish author’s bestselling Daughters of Lancaster County series is being adapted into the brand-new stage musical Stolen. Created by Blue Gate Musicals, the production debuts June 29, 2018 at the Blue Gate Theater in Shipshewana, Indiana. The show will also appear at the Ohio Star Theater in Sugarcreek, Ohio, beginning September. 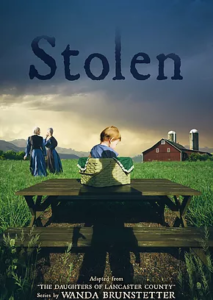 In Stolen, a small Pennsylvania community is shaken when the infant son of a prominent Amish family is kidnapped. As accusations fly and everyone comes under suspicion, a quirky, bumbling detective takes on the case. With no real leads and frustrations mounting, the case goes cold. Twenty years later the town is thrown into turmoil again when Naomi decides to reopen the case and finally discover who kidnapped her little brother.

Blue Gate Musicals uses their signature blend of the comedic and dramatic to bring their newest full-length musical to the stage. Stolen, a unique mystery full of intrigue and humor, will captivate audiences from the opening curtain to the final bow.

To coincide with the debut of the musical, Barbour will be releasing the omnibus edition The Daughters of Lancaster County, featuring matching cover art from Stolen’s promotional poster. The three-in-one collection will release in August 2018.