What parallels do you see between the ancient Romans and contemporary American society?

The more secular the United States becomes, the more like the Romans we become. The chief difference between our two systems is that America was founded by Christian people who sought religious freedom. The Romans celebrated religious freedom, too, but they were pagans, with a god for everything.

What theme or idea do you hope readers come away with after reading Paul, Apostle of Christ?

The realization that struck me most as I worked on the book was this: Paul and Luke and Priscilla and Aquila lived in a time when they could be arrested, tortured, and burned on a cross simply for being known as a Christian.

I grew up in a time when most of the United States claimed to be Christian, but that time has passed. Today believers in Christ are routinely insulted, vilified, or mocked simply for saying something about Jesus on Facebook—and sometimes we remain silent when we should speak out.

But Paul and Luke and the others were fearless because they lived for Christ and His kingdom, not for this world. Their treasures weren’t on earth. Their hearts weren’t fixed on earthly relationships. Their obedience was to Christ and no one else.

Their example was humbling—and challenging. That is the lesson I hope people take away from this film and this book. If we truly believe, we need to adjust our focus and look to Jesus, the Author and Finisher of our lives. 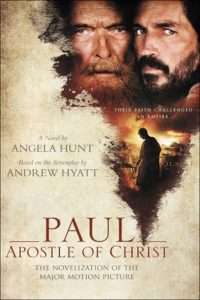 His Story Will Change the World, But Only If It’s Shared in Time

Paul, Apostle of Christ is the story of two men. Luke, as a friend and physician, risks his life every time he ventures into the city of Rome to visit Paul, who is held captive in Nero’s bleakest prison cell. Before Paul’s execution, Luke resolves to write another book, one that details the beginnings of “the Way” and the birth of what will come to be known as the church. But Nero is determined to rid Rome of Christians.

Paul has survived so much–floggings, shipwreck, starvation, stoning, hunger and thirst, cold and exposure–yet as he waits for his appointment with death, he is haunted by the shadows of his past. He wonders if he has been forgotten—and if he has the strength to finish well.

Two men struggle against a determined emperor and the frailties of the human spirit in order to bequeath the gospel of Jesus Christ to the world.