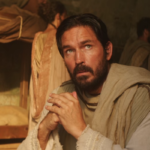 For Paul, Apostle of Christ, The filmmakers have been very open about sticking closely to the Scriptures. As you wrote the novelization, were you following the screenplay or going straight to the Bible?

I tried to do both. Because a novel is usually more than twice as long as a screenplay, I had to add quite a bit. So when I added material, I used Scripture and logical connections. For instance, Paul had a sister and nephew in Jerusalem—how often do we hear about them?

Luke was Greek, and would have been educated in the Greek system. Paul probably knew Stephen from his days as a student with the Sanhedrin. He would have known Nicodemus and Joseph of Arimathea. What would their interactions have been like?

What kind of research did you have to do to get the details right? How much did you need to look into church tradition and extrabiblical sources to fill in the gaps?

I always do a lot of research, but I try to find sources written in the era I’m writing about—too much can be convoluted by later writers. Church tradition is replete with legends that strain my credulity, so I tend to avoid those stories unless they are plausible.

I could never rely on just one source because biblical “experts” disagree with each other all the time, especially about ancient civilizations–and most of them are quite dogmatic about their positions.

I always read several sources and then try to pretzel them together into a cohesive picture, then apply common sense and logic. The only book I leave quite alone is the Bible, but it leaves great holes that could be fleshed out in myriad ways.

As you researched, did you discover anything about the life and times of Paul, or the culture he wrote in, that might be surprising to readers?

What I found myself doing was looking for logical connections Paul might have had with other characters. He was part of the Sanhedrin along with Nicodemus and Joseph of Arimathea. Did they know each other? Did they interact? We know Paul was present when Stephen was killed, but did he know him before that day? Since nearly every religious Jew went to the Temple during the Pilgrimage festivals, could Paul have been present when the twelve-year-old Jesus was confounding the rabbis during Passover?

The world was a smaller place in those days, so those situations might have happened. That intrigued me.