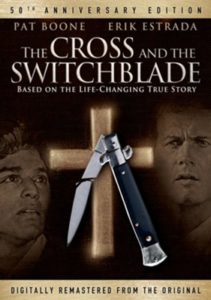 Based on the true memoir, The Cross and the Switchblade was a groundbreaking example of faith-filled drama that inspired a generation of filmmakers.

Ahead of its release to DVD this summer, Revelation Media is offering viewers the chance to watch the 50th Anniversary remastered edition of the classic religious drama The Cross and the Switchblade online free. Based on the compelling true story, the film starred Pat Boone and Erik Estrada, was directed by Don Murray, and featured a remarkable score from Christian music legend Ralph Carmichael.

Now, 50 years after its theatrical release, Revelation Media is offering a digitally remastered version of the film for a new generation. The Cross and the Switchblade can be watched free online exclusively at Revelation Media, then releasing on DVD July 7.

“The Cross And The Switchblade is one of the great true stories of faith. Even five decades after its release, this story of a pastor’s faith and conviction to share Christ with a hurting community continues to change lives.”

Originally released in 1970, The Cross And The Switchblade is based on David Wilkerson’s 1963 memoir of the same name. As recounted in the nonfiction book, Pastor Wilkerson was touched by a 1958 magazine article about seven teens who were members of a criminal gang. Alone and with little money, he left his small church in Pennsylvania to move to Brooklyn and talk about Jesus with members of street gangs. Wilkerson founded the addiction recovery program Teen Challenge, and started the non-denominational Times Square Church in New York City.

The 1970 film dramatization starred Pat Boone as David Wilkerson. Erik Estrada, in his screen debut, portrayed teen gang member Nicky Cruz. (Cruz, who went on to become an evangelist, shared his side of his testimony in the classic memoir Run Baby Run.)

The Cross and the Switchblade Trailer

To view The Cross And The Switchblade online, go to Revelation Media.

BUY THE DVD FROM OUR STORE

The Cross and the Switchblade 50th Anniversary DVD

Long before faith-based films became a regular feature of mainstream movie theaters, there was, The Cross and The Switchblade. The film was made squarely within the Hollywood system yet, was set apart by the unashamedly Christian vision of its producers. It went on to become a worldwide min-istry phenomenon and it stands among the early sparks that ignited today’s growing Christian film movement.

Based on the 1963 autobiography, of the same name by David Wilkerson, the film depicts the unlike-ly efforts of a “skinny country preacher” to bring change to the desperate lives of gang members liv-ing and dying on the mean streets of New York City. Among those whose lives were transformed was the notorious gang-leader Nicky Cruz who went on to lead a decades long outreach to gang members and other distressed young people.

Wilkerson’s mission to tell lost and hurting young people that there was a better way through Jesus Christ, blossomed into the Times Square Church and the international ministry of World Challenge whose mission is to bring lasting, holistic change to individuals and communities.

The story lives on in the book, in this film but more importantly in the legacy of lives transformed by the message that no one is ever so far gone that they cannot find the way home.