Fiona Veitch Smith whodunit series Poppy Denby Investigates follows a journalist solving mysteries in 1920s London. With the release of the second book, The Kill Fee (Lion Fiction), Fiona shares the inspiration for the novel, explains the research that went into the book, and tells us what makes her sleuth so interesting…

Can you describe your plot in one sentence?

Where did the inspiration for this novel come from? 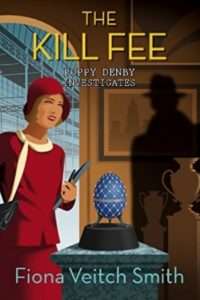 June 1913 was the anniversary of the death of suffragette Emily Wilding Davison who was trampled by King George Vs horse at the Epsom Derby. She lived, and was buried, just up the road from me in Morpeth, Northumberland. I had been toying with the idea of writing a reporter-sleuth series for a while, then on the day I went to visit Emily’s grave – to mark the centenary of her death – I had the idea of making the sleuth a suffragette. I initially conceived of her investigating the death of another suffragette, around the same time as Emily died, who was somehow caught up in the same plot. As my planning for the novel – The Jazz Files – progressed, I decided to set the series in the 1920s and make the sleuth a niece of a suffragette instead. (The reasons for the shift in time period are explained at the end of the first novel). And so the Poppy Denby Investigates series was born.

Are any parts of the plot or characters pulled from real life?

Yes. Throughout the Poppy Denby series readers will meet fictional and historical characters rubbing shoulders. Mostly these are in cameo – for example Charlie Chaplin in The Jazz Files and George Bernard Shaw in The Kill Fee – but sometimes they have a more active part to play in the story, such as the assassin of Rasputin, Felix Yusopov, who features in The Kill Fee. My historical notes and character lists explain to readers who is fictional and who isn’t. Also, Poppy’s experience as a young female journalist in a man’s world is based, to some extent, on my own as a journalist in Cape Town in the 1990s.

What influences your writing the most?

I am most influenced, or perhaps motivated, by the need to show ‘outsiders’ fighting for their place in the world. Stories of people who have been excluded from things the rest of us take for granted always touch my heart. This can be due to physical or mental illness, disability, class, gender and so on. My stories are populated by underdogs whom those in power often dismiss, ignore or underestimate. Most obviously, my books deal with the role of women in society, but you don’t have to look too far to see other ‘outsiders’ in their pages. I think the root of this, for me, is that when I was ten my family moved from England to South Africa where I was very much ‘the outsider’. That experience has profoundly affected me and given me empathy with other people who don’t quite ‘fit’.

What research did you do for this novel?

I absorb myself in the music, fashion, art, architecture, cuisine, cinema and theater of the period. There are lots of collections online, plus books to read and museum exhibits to visit. Particularly interesting are the suffragette exhibition at the Museum of London and the fashion exhibit at the Victoria and Albert Museum. I even made an outfit from an original 1920s pattern for my first Poppy Denby photo shoot! I also traveled to London and spent a few days traveling the bus routes and walking the streets Poppy would have frequented.

In terms of the historical backdrop of the suffragettes (book 1) and the Russian Revolution (book 2) I took a more ‘academic’ approach. I have a degree in history and spent around four months sketching timelines and flow charts, trying to reach an understanding of the broad historical, political, social and economic backdrop, rather than memorizing ‘details’. The details can, and are, easily added later. But I do not start writing until I have a feel of what it might have been like to live in that period – I try to read diaries, biographies, and novels written at the time – as well as how the period ‘fits’ into history.

But then I stop, switch brains, and start to focus on the story, the characters and the mystery. That for me is the most important part. The history is certainly the skeleton of my books, but the muscles, the flesh and the beating heart are Poppy, her friends and their adventures.

Who is your favorite character in the book?

That would be Rollo Rolandson, Poppy’s American editor, who won The London Globe in a poker game. He suffers from dwarfism, yet in personality and journalistic ability is a giant of a man. He is bold, brash and fearless and is a wonderful mentor to young Poppy. In book 3 in the series (coming out later this year) Rollo takes Poppy with him back to New York.

What makes your sleuth such an interesting character?

Most women – and hopefully a good few men – can identify with Poppy’s struggles to make it in a world where the odds seem stacked against her. She is ambitious, yes, but not at any cost. One of the most interesting things for me is Poppy’s struggle to retain her integrity in a career where corners are often cut and the end justifies the means. Poppy is a woman who believes in God but is struggling with her faith because of the loss of her brother in WWI. She, like many of us, wonders at times where God is in a world of suffering. It is because of this characterisation, I feel, that my books are read and enjoyed by non-Christians too, and the faith element just considered a natural part of the story. I do not write Christian Fiction, but the Christian faith is woven through the pages of my books.

What are you currently reading?

I’ve finally got around to reading Robert Galbraith’s The Cuckoo Calling. ‘Galbraith’ is actually JK Rowling and I’m very impressed how she has moved from Potter to adult crime noir. The language is a bit ripe (so should come with a health warning to your readers) but the plotting and characterisation are excellent. I’m loving it.

Where will your writing take you next?

Poppy 4 is going to have an Egyptian theme, set at the same time as the discovery of King Tutenkamun’s tomb. I may just have to book a holiday there sometime soon… for research purposes only, of course…