The author explains how she writes psychological suspense from a Christian worldview.

With a combined total sales of more than 3.5 million, Irene Hannon is one of the leading authors in inspirational romantic suspense. Her gift of delivering a perfect mix of intrigue and romance continues to draw in new fans with each new book.

Irene brings her Code of Honor series to a thriller conclusion with Dark Ambitions (Revell): When a visitor to a foster camp for children turns up dead, police say it was an accident—but former Army Night Stalker Rick Jordan isn’t convinced. He teams up with private investigator Heather Shields to find the truth. Except someone doesn’t want them to succeed. With her trademark psychological suspense ratcheting up the tension on every page, bestselling and award-winning author Irene Hannon takes you on a search for a cold-blooded killer with an ambitious goal and deadly intent.

In this interview, Irene talks about the book, explains what ties the series together, and reveals the challenges of writing about crime and danger as a Christian author…

Irene, Dark Ambitions is the conclusion to your Code of Honor series. What can you tell us about it? (No spoilers!) 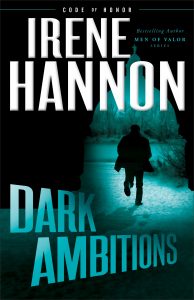 Former Army Night Stalker Rick Jordan usually has his camp for foster children to himself during the winter months. But someone has visited recently, leaving a trail of blood behind.

One of the two clues Rick discovers tips him off to the identity of his visitor—who soon turns up dead. The police deem it an accident, but Rick isn’t convinced.

With the help of private investigator Heather Shields, he sets out to decipher the remaining clue. Except someone doesn’t want them to succeed—and will stop at nothing to keep them from finding the truth.

What connects the three books in the Code of Honor series together?

This series features three childhood friends from dysfunctional backgrounds who met in middle school and whose bond has been strengthened by time—and danger. A different friend is featured in each book. All three stories stand completely alone, with no plot threads carried from book to book, so a reader can read just one of the books if they choose.

What was your inspiration for Dark Ambitions? 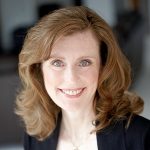 I wanted to create a story that showed how ambition can distort people’s thinking to the point of making them believe their actions are justified. I also wanted to create several credible villains so I could keep readers guessing right up to the end.

In Dark Ambitions, you write about an army night stalker. What type of research did you need to accurately write about this role?

Since my hero’s days as an army night stalker are in the past, I don’t focus on the details of that career. However, there are a few scenes in which the hero is flying a helicopter. I needed very specific technical information for those, so I called on several experts for help—two experienced helicopter pilots and two helicopter mechanics. They were invaluable in helping me create a realistic, edge-of-the-seat situation that will keep readers flipping the pages.