Ella is an artist searching for some inspiration to get her career on the right track. She was not looking for love and most certainly not a ready-made family, but when she meets a rugged rancher and falls for his three children, things get complicated quickly. We spoke with Carolyne Aarsen about her latest Love Inspired release, Courting the Cowboy. She filled is in about her inspiration, her faith and why she struggles with happy endings.

WHAT INSPIRED COURTING THE COWBOY?

I had a picture in my head of a gum-popping teenage girl, who was working as a nanny, dropping three young kids off at the house of a woman who had come to this ranch to retreat and retrench.

The woman is not sure what to do about this situation and is quite uncomfortable around the children. But the teenage girl doesn’t care and flies off before the woman can protest. And now she’s alone with the kids and doesn’t know what to do.

That made me wonder why is she unhappy having the kids around? What makes her uncomfortable around them? Where is the children’s father and why does he need a nanny?

From those questions came some answers, but as with most stories it also brought more questions. As I dug through my character’s backstory and worked through the questions they raised the story slowly took shape. 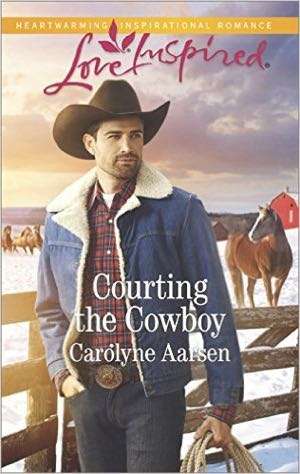 Ella, the heroine, is the woman on the deck. She came to Cedar Ridge with the hopes of finding her muse back by retreating to a quiet place where she can focus. She’s a blocked painter who is struggling to get a new portfolio together for a teaching job at a school connected with a prestigious gallery. This job is her chance to move on from the tragedy of her past and create a new future. It’s a huge opportunity and she doesn’t want to mess it up. Trouble is she can’t seem to find her inspiration to paint anymore. She used to do dark and serious work but that work was an expression of the pain she was dealing with. Does she really want to go back there? However, the school is considering her for this very good position based on her previous work. She feels stuck in the past but is afraid to move on and try something new. Afraid to risk this opportunity but also afraid to go back to a place she wasn’t happy.

Cord is a man wracked with guilt. His wife had been involved in the Cedar Ridge Rodeo Group, an organization trying to expand the scope of the local rodeo. But when she dies in a car accident on her way to a meeting that they fought about, he feels he has to carry on her legacy. Trouble is he’s trying too hard and his children are paying the price. He’s gone a lot, trying to make up for what he sees as his mistake in not supporting his wife.

And then there’s the three children, Paul, Suzy and Oliver. Paul is a typical oldest child—careful and a people pleaser. Suzy lives life with gusto and isn’t afraid to go barging in where she’s not invited and making herself at home. Oliver is an adorable toddler with a fluff of blonde hair and chubby, kissable cheeks. I had so much fun writing them because they were all very close to my grandchildren’s ages. So the scenes with them fairly wrote themselves.

ELLA IS RECOVERING FROM A TRAGIC ACCIDENT. CAN YOU TELL US WHAT HAPPENED TO HER?

I feel like I should put a spoiler alert here. The accident and the repercussions of it don’t get revealed until much further on in the story. It’s a secret Ella has kept from friends and family and has influenced many of the decisions she’s made since then. It has also kept her from painting and it’s what keeps her from connecting with Oliver, Cord’s youngest son, which initially causes problems between her and Cord. So, if you don’t mind knowing the secret and finding out, I can tell you. If you don’t want to find out, you might want to skip the rest of this answer.

Ella was in an abusive relationship with a man who was partners with her mother. She wanted to be faithful but at the same time she couldn’t see her way out. Then she got pregnant. It was not what she wanted and it made her feel even more trapped. One day she and her husband had a huge fight and in the ensuing struggle she fell down the stairs. She was eight months pregnant and she lost the baby, a little boy. Guilt has been her constant companion ever since then. If she had left sooner she wouldn’t have lost her son. Oliver, Cord’s son, is the same age her son would have been had he lived. So whenever she sees the little boy she is reminded of her loss.

DO YOU BASE YOUR CHARACTERS ON PEOPLE YOU KNOW OR HAVE RESEARCHED, OR ARE THEY ALL MADE UP?

My characters are often made up but they are usually a composite of myself, people I know, stories I’ve read, televisions shows and movies I’ve watched. I’m like a magpie – always gathering character traits, motivations, back stories from every situation I’m in, every person I meet. Ella wasn’t really based on anyone in particular, nor is Cord, though I tease my husband that all of my heroes are based on him!

HOW DOES YOUR FAITH INFLUENCE HOW YOU APPROACH WRITING STORIES?

Every story I write is about a character’s growth. They start out in a position that is not healthy. They need to change but either they can’t or don’t know how or don’t have the support system in place to facilitate that change. At any rate, the events of the story will force that to happen. And often, a huge part of that transformation has to do with their relationship with God. It’s broken and needs to be fixed. The story is as much a journey of their faith as it is a journey of their growth as it is a romance. I’m always very thankful that writing for Love Inspired, I’ve been able to and encouraged to incorporate my faith into the stories I write.

WHAT ARE THE CHALLENGES – OR BENEFITS – OF WRITING ROMANCE STORIES AS A CHRISTIAN?

The benefit, as I said before, is that I’m able to write from every aspect of my beliefs and my personality. I’m a romantic who still believes in the redemptive power of love but I’m also a Christian who believes in the redemptive power of God’s love. The challenge is to be as realistic as possible – to show real struggles endured by real people and still show God working in their lives. But, at the same time, to bring the characters to a place where we, as readers, believe they can now move on into a richer deeper life.

I have been challenged on the happy ending that each of my stories has. Anyone who has l 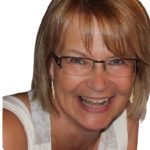 ived on this earth and spent time with other people or been in a relationship knows that life can deal us sorrow and heartbreak. There is brokenness and there is pain. Not everyone gets a ‘happy ever after’. In fact, I would say that no one really does on this earth. My husband and I have gone through our own valleys of grief, loss and dreams we’ve had to set aside. We’ve buried a child, dealt with serious illnesses, had financial struggles and disappointments and sat by dying parents’ bedsides. But at the same time we can say that we have been richly blessed. There have been happy and amazing moments in our life’s stories as well. And, I hope, there will be many more. I know my characters aren’t going to go on to a life without struggles, if they were real people (and sometimes to me they are). I like to say that instead, I have chosen to end the story at a positive and redemptive point in their life. I know I’ve had them in mine and that’s the ending I choose to give my hero and heroine.

I hope that the readers of my books are able to come along on the journey I take them with my characters and trust that I will take them, at least for this book, to a good place in my hero and heroine’s lives.