Amy is unemployed, recovering from an eating disorder and returning home over burned bridges. Gabe was her teenage flame and suddenly the two are back in each other’s lives. Will they cling to hope find a second chance and perhaps even love? Johnnie Alexander is taking readers back to Misty Willow with her third installment in the series titled What Hope Remembers (Revell). Johnnie shared with us about her inspiration behind the story and what she learned while writing this novel.

WHAT INSPIRED THE STORY IN WHAT HOPE REMEMBERS? 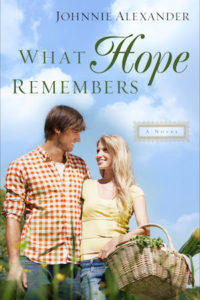 For this story, it wasn’t “what,” but “who.” I never planned on writing a novel with Amy Somers as the protagonist. She appears in the first two books in the Misty Willow Series as a not-very-nice person. (And that’s being kind.)

But when I met with my first-readers group—three close friends and my older daughter—they insisted that Amy’s story needed to be told. They cared about her despite her self-centered and vengeful spirit. As Amy and I got to know each other in the writing process, I came to care about her, too. The group was right. Amy needed a voice in this series.

WHAT ARE THE CHALLENGES – OR BENEFITS – OF WRITING ROMANCE FICTION AS A CHRISTIAN?

Though the heroine and the hero usually are attracted to one another, an inspirational romance emphasizes the emotional and spiritual aspects of their relationship. Their eventual love for one another is deepened because it’s based on something solid and true.

Still, the story must remain true to the character. In When Love Arrives, the second book in the series, the hero has already been established as a love-‘em, leave-‘em kind of guy. As he endeavors to be someone different, to be a better man, he struggles with his physical attraction for the heroine. We see him becoming the man he longs to be as he overcomes his temptations.

WHAT DID YOU LEARN IN THE COURSE OF WRITING WHAT HOPE REMEMBERS?

I can write fast when I have to! Because of personal circumstances, I got behind but I was determined to meet my deadline. I think it was about 10:30 p.m. on the day of the deadline when I emailed the manuscript to my editor.

I also thrilled once again to the mystery of the creative process. It feels to me, and I hope it feels to the reader, that the entire story inevitably leads to the last lines in the next to the last chapter. But I didn’t know those words would appear until they did. I love that!

WHAT WRITERS/STORYTELLERS/MOVIES INFLUENCE YOU AS A WRITER?

Ann Tatlock’s lyrical writing always inspires me. Her novel Once Beyond a Time is one of my favorites. She has a gift for giving voice to diverse characters, and her stories are delightfully unique.

Readers of the Misty Willow Series know I’m a big Cary Grant fan and so are most of the main characters. My favorites are Notorious and Charade. I’m sure these and other classical movies are an influence.

I appreciate books and movies with depth and surprises (even when they aren’t thrillers or mysteries) and those that resonate with something deep inside of me. 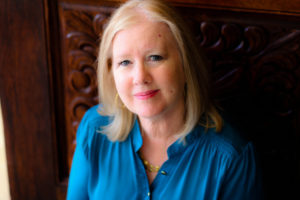 “We don’t have to be defined by our pasts.”

I can tell you that in a lecture or in a sermon. Or I can invite you into the world of two characters. Amy Somers is ashamed of her past because of the choices she made. Gabe Kendall is ashamed of his past because of things that happened over which he had no control. The past won’t go away, but that doesn’t mean they can’t be different people for that they can’t renew the love they once had for each other.

We’re more likely to remember the characters—what they experienced and learned—than the lecture or the sermon. That’s why story is so powerful.

ARE ANY PARTS OF THE PLOT OR CHARACTERS PULLED FROM REAL LIFE?

The characters live in a rural county southwest of Columbus, Ohio. This is where I spent most of my childhood and teen years. The Misty Willow house-turned-museum is based on a large brick house built in the mid-1850s where my family once lived.

In What Hope Remembers, the protagonist Amy Somers lives in a cottage with a long row of windows. My family spent summer days in this cottage but I had to “move” it closer to the Misty Willow House for the series.

CAN YOU DESCRIBE YOUR PLOT IN ONE SENTENCE?

A disgraced lobbyist recovering from an eating disorder and a Marine who served a prison sentence rekindle their teenage love as they confront their painful pasts.

IS THIS NOVEL PART OF A SERIES? IF SO, WHAT ARE SOME OVERARCHING THEMES IN THE SERIES?

What Hope Remembers is the third novel in the Misty Willow Series. The characters often are affected by events over which they had no control and by decisions made by their parents and grandparents. We see how our actions can influence—both for good and for ill—the generations that come after us. What legacy do we want to leave our children and grandchildren?

Forgiveness is another important theme throughout the series. In the first two novels, the characters seek each other’s forgiveness. The hero and heroine in What Hope Remembers need to forgive themselves, to refuse to let the past define their future any longer, if they are to find the love they seek.

WHAT MAKES YOUR PROTAGONIST AN INTERESTING CHARACTER?

WHERE WILL YOUR WRITING TAKE YOU NEXT?