As co-creator of VeggieTales and the voice of the beloved Larry the Cucumber, Mike Nawrocki has been dedicated to helping parents pass on biblical values to their kids through storytelling more than two decades. His latest project is the chapter-book series The Dead Sea Squirrels (Tyndale House): When 10-year old Michael sneak into the Dead Sea caves near his dad’s archaeological dig, he finds two 2,000-year-old squirrels petrified in sea salt. He brings them back home in his backpack—and hijinks ensue! In this interview, Mike explains the cool method Dead Sea Squirrels uses to teach biblical concepts, reveals the biggest differences between this series and VeggieTales, and shares about his recent collaborations with CCM artist Michael W. Smith…

The Dead Sea Squirrels is such a fun concept—with SUCH a great name! What inspired this series? 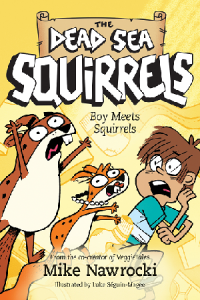 I first came up with the idea for The Dead Sea Squirrels a number of years ago. One of the limitations we faced with VeggieTales, since all the characters were vegetables, was telling Bible stories about Jesus. We decided early on that it would be crossing the line to represent Jesus as a veggie. As a result, most of the Bible stories we retold were from the Old Testament.

Also, VeggieTales went “back in time” to tell stories. I thought it would be interesting to come up with a premise that would allow fictional characters from Bible times (like the squirrels) to come forward in time and tell stories about what they witnessed, including events around the life of Christ. All in a funny way, of course!

Playing off ancient historical documents like the Dead Sea Scrolls and tying them in with squirrels seemed like a good idea?!

In a nutshell (heh), can you outline the basic concept of The Dead Sea Squirrels for our readers?

Ten-year-old Michael and his best buddy, Justin, are spending the summer in Israel along the banks of the Dead Sea with Michael’s anthropology professor dad. Deep inside a cave, on the last day before returning home to the States, the boys discover a couple of salt-encrusted, dehydrated squirrels. Justin thinks they are disgusting, but Michael thinks they are cool and stashes them inside his backpack, unbeknownst to his father.

Michael smuggles the crusty critters back home to Tennessee with him in his backpack where, after leaving them out on his bedroom dresser under an open window, they are rained on, resulting in their rehydration and desalinization. Michael returns home from his first day of fifth grade to discover two very disoriented talking rodents named Merle and Pearl Squirrel whose last memory is getting lost in a cave 2,000 years ago.

We learn that Michael’s new fish-out-of-water pets lived during the time of Christ. They have great advice and stories to share which relate to the modern world, and they fast become the wise and kooky grandparents Michael never had.

On the next page, Mike explains the biblical themes in the book! Click through to continue…