Given how iconic the VeggieTales brand is, how much pressure does that put on you when you’re creating something new? 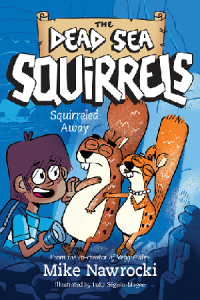 It’s always hard to tell a good story. When we started VeggieTales, we never dreamed it would become as iconic as it has. We just tried to tell engaging stories with a great message. Every story was its own challenge.

I’ve approached The Dead Sea Squirrels the same way; trying to tell a fun story with themes that kids can connect with.

The Dead Sea Squirrels and VeggieTales both approach teaching Bible concepts from a fresh and fun angle. Would you compare/contrast for us how the two different series approach that idea?

Both begin with a theme or lesson that the story revolves around. Both use humor and fun characters.

One of the biggest differences is the medium of animation versus books. The great thing about books is being able to communicate what characters are thinking or make funny observations and comments as the narrator.

The Dead Sea Squirrels is targeted at slightly older kids who are just learning to read. So, beyond entertaining and introducing biblical concepts, my hope for this series is that the books will help to instill a love of reading.

You were also involved in the Nurturing Steps series with Michael W. Smith. How did that collaboration come about?

Michael had a vision for a lullaby album with songs about Jesus’ love for kids. He contacted me to see if I could help develop the album along with a group of characters that could sing in it. It’s been a thrill and honor working with him. Michael has such a great heart for worship and now that he’s a grandfather a dozen times over, he’s spending a lot of time reading and singing for his grandkids.

So far, we’ve created one album and written two bedtime books based off of the Nighty Night characters—a band of three animals who show up and sing lullabies when kids are having a hard time falling asleep. 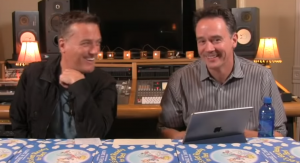 What’s your role with Nurturing Steps? (Any new volumes planned?)

My role has been character creation and story writing. Michael and his son Tyler definitely have the music thing down! We do have plans for a Christmas book later this year and possibly a Christmas lullaby album.

Given your background, are there plans to develop The Dead Sea Squirrels into other types of media? Or is this intended to be a book series only?

I originally conceived of The Dead Sea Squirrels as an animated property. I’ve had such a blast developing the characters and the world for the books, and I would love to see them animated as a TV series or movie one day!

In addition to buying the books, what are other ways for readers to support The Dead Sea Squirrels?

I hope readers love the books, and if you do, please tell your friends! You can find more info about The Dead Sea Squirrels on my website or visit my Instagram or Facebook.

In the first installment of this hilarious new chapter-book series, ten-year-old Michael and his friend Justin sneak into the Dead Sea caves near the archaeological dig where Michael’s dad is working. Michael finds two 2,000-year-old squirrels petrified in sea salt. Hijinks ensue as Michael tries to bring them back to the U. S., hidden in his backpack. What Michael thinks are just cool souvenirs may turn out to be something much more! The Dead Sea Squirrels series is humorous, fun, and filled with character-building lessons.

The Dead Sea Squirrels are alive! In book 2 of Mike Nawrocki’s hilarious new series, the two petrified squirrels Michael brought home from Israel are awake and ready to dive into the 21st century. Turns out, the squirrels lived during the time of Jesus and love sharing the lessons they learned from his teaching in their own quirky way. Missteps and misadventures abound as Merle and Pearl help Michael and his friends confront a bully, using lessons from the Sermon on the Mount.