Nashville, TN (January 10, 2021)
Christian fiction author Michelle Griep has been writing since she first discovered blank wall space and Crayolas. She is the Christy Award-winning author of historical romances like A Tale of Two Hearts, The Captured Bride, The Innkeeper’s Daughter, 12 Days at Bleakly Manor, and many more. She also leaped the historical fence into the realm of contemporary with the zany romantic mystery Out of the Frying Pan. Now she has released her latest historical romance novel, The Thief of Blackfriars Lane.

Book Summary:
There’s Often a Fine Line Between a Criminal and a Saint: Constable Jackson Forge intends to make the world safer, or at least the streets of Victorian London. But that’s Kit Turner’s domain, a swindler who runs a crew that acquires money the old-fashioned way—conning the rich to give to the poor. When a local cab driver goes missing, Jackson is tasked with finding the man, and the only way to do that is by enlisting Kit’s help. If Jackson doesn’t find the cabby, he’ll be fired. If Kit doesn’t help Jackson, he’ll arrest her for thievery. Yet neither of them realize those are the least of their problems. 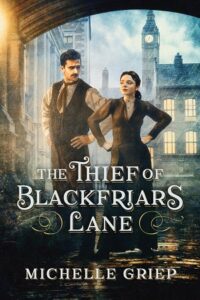 Buy The Thief of Blackfriars Lane from the FF Store HERE!

Buy The Thief of Blackfriars Lane from Amazon HERE!