Nashville, TN (December 29, 2022)
New York Times best-selling Christian fiction author Melanie Dickerson is back with another thrilling adventure novel titled, Fortress of Snow. The fourth book in her beloved A Dericott Tale Series, Fortress of Snow is a bracing story that follows heroine Mazelina of Wexcombe—Mazy for short—in the reimagined tale of the treacherous Snow Queen. Melanie is a bestselling author and two-time Christy Award winner. Melanie spends her time daydreaming, researching the most fascinating historical time periods, and writing and editing her happily-ever-afters.

Book Summary:
Having spent most of her life behind the relative safety of her castle walls, Mazy is itching to go beyond and travel to far off lands with her father, but when he dies unexpectedly and her oldest brother abandons her, Mazy must travel to her other brother’s estate for aid. While there, she kindles and unexpected friendship with Sir Berenger of Dericott, a dashing and noble man with dreams to rescue a damsel in distress. But Mazy doesn’t need saving – in fact, her skills with a bow and knife rival that of the best knight, so when Sir Berenger is called off to war, he makes plans to distinguish himself in battle. When he returns, however, the King wants to recognize his service through marriage to a wealthy and titled widow, but Mazy begins to suspect that more than a marriage might be afoot and treachery lurks in the shadows, so she embarks on a journey to warn her friend and perhaps secure her own fairy-tale ending.

Can Mazy claim the independence she so desperately wants and save her knight, and possibly her love, in the process? 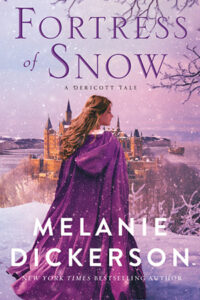 Buy Fortress of Snow from the FF Store HERE!