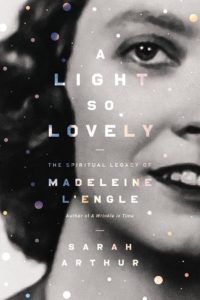 GRAND RAPIDS, MICH., February 2018 — Bestselling and beloved author of the classic A Wrinkle in Time (arrar, Straus and Giroux ), Madeleine L’Engle is known for her fascinating perspectives on science, art, story and faith. This year, over half a century since the timeless novel was originally published (1962) and what would’ve been L’Engle’s 100th birthday, readers are given a peek into her rich life of faith in A Light So Lovely: The Spiritual Legacy of Madeleine L’Engle, Author of A Wrinkle in Time (Zondervan) by Sarah Arthur.

The upcoming book is set to release after Walt Disney Picture’s wildly anticipated A Wrinkle in Time film adaptation, which hits theaters March 9, 2018. The theatrical film adaptation starring Oprah Winfrey, Reese Witherspoon, Mindy Kaling and more takes viewers on an enchanting journey to worlds beyond their imagination as light collides with darkness.

“We are thrilled to be working with Sarah Arthur, whose vivid portrait of L’Engle’s imagination and faith has much to say to readers today,” said Stephanie Smith, acquisitions editor for Zondervan Books. “Madeleine was a master of story, and to her, every story was an act of faith. She said it best herself: ‘We do not draw people to Christ by…showing them how wrong they are and how right we are, but by showing them a light that is so lovely that they want with all their hearts to know the source of it.’”

In A Light So Lovely, Arthur digs deeply into the life of a woman who continues to be a beacon for generations of readers struggling to reconcile faith and science, art and religion, sacred and secular. Drawing from interviews with L’Engle’s literary contemporaries such as Philip Yancey and Luci Shaw, L’Engle’s granddaughter Charlotte Jones Voiklis, and influential fans such as Makoto Fujimura, Nikki Grimes, Sarah Bessey, they reveal new layers to the woman behind the stories we all know and love.

Sarah Arthur is a speaker and the author of more than a dozen books ,ranging from devotionals to serious engagement with literature and story. She’s the preliminary fiction judge for the Christianity Today Book Awards and has been writer-in-residence for the Frederick Buechner Writers Workshop at Princeton Theological Seminary. She has served in youth ministry for more than 20 years.