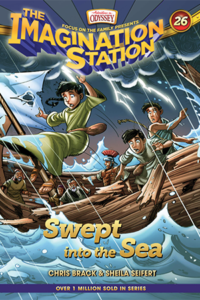 Carol Stream, IL (October 6, 2020)
Focus on the Family, in alliance with Tyndale House Publishers, have released Swept into the Sea, #26 in the Imagination Station Series.

With over 1 million copies sold in the series, The Imagination Station Series continues with cousins Beth and Patrick on a storm-tossed grain ship in the Mediterranean Sea during the first century. On the ship, the cousins meet Paul, a prisoner on his way to Rome for trial, and his traveling companions. Despite the threat of shipwreck, Paul says that God has told him that everyone on the ship will be saved, if they stick together. Yet, when the passengers are forced to abandon ship and swim for shore, God’s promise seems doubtful.

The Imagination Station Series, a spin-off of the beloved Adventures in Odyssey audio dramas, teaches history and a biblical worldview through time-travel adventure stories. Every book includes a secret word puzzle; readers then head to TheImaginationStation.com to enter their answer to unlock a prize.

Swept into the Sea is co-authored by Chris Brack and Sheila Seifert. Brack is a published author of stories, crafts, and short nonfiction. Seifert is the director of parenting content for Focus on the Family magazine, a content strategist for its online parenting channel, and the book review editor for PluggedIn.com.