The historical romance author talks about her purpose as an author.

Known for her fast-paced historical and contemporary romantic comedies, Lori Copeland is a two-time Romantic Times Lifetime Achievement recipient, a RITA and Christy Award nominee, and an inductee of the Missouri Writers Hall of Fame. In 2014, Hallmark Movies produced her contemporary title Stranded in Paradise. This summer, Tyndale House has started re-releasing her popular Brides of the West series, and Lori talked to FamilyFiction about the classic books. In this exclusive interview, the author tells us where the idea for the series came from, how her faith informs her fiction, and the power of writing romances from a biblical worldview.

The series theme is young mail-order brides in the old west. Since travel and distance was often a big obstacle for these women it wasn’t uncommon to resort to marrying a man the girl had never met. It would take a lot of courage and faith to leave home and strike out on a life-changing adventure but the main characters in the series, Faith, June, and Hope, chose to find a mate this way.

What was the original inspiration behind the concept and characters of the Brides of the West series? 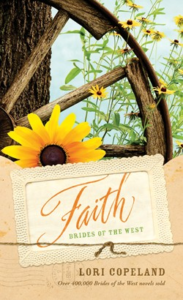 Oddly enough, it started with the one book contract for Faith. I named her Faith because she took a leap of faith in believing in God’s faithful leading. When Faith was released, readers wanted more, thank goodness, so my editor suggested we make Brides of the West a three-book contract. From there, the series acquired a devoted following. Since I’d fallen in love with the characters, I was only too happy to continue with two more books, making Brides a six-book series.

What drew you to writing about mail-order brides in the old west?

I had a friend who was a mail-order bride. This was often the case for women living in the 1800s in towns where single men weren’t as plentiful. Mail-order brides compare to today’s online dating services.

Which characters surprised you the most over the course of writing this series?

Faith, because of her steadfast faith. Then Patience turned out to be a handful. Her adventurous personality made for some merry chases and improbable situations, but God saw her through thick and thin times. Glory was also fun to develop.

I enjoyed writing about an innocent young mountain woman with so little experience of the world. Her sheltered life left her completely unprepared for marriage, but she was able to rise to the occasion with a lot of chuckles along the way.

What keeps her coming back to the Old West? Click through to find out!