Amanda Cabot is the bestselling author of Out of the Embers and Dreams Rekindled, as well as the Cimarron Creek Trilogy and the Texas Crossroads Series, Texas Dreams Series, and Westward Winds Series. Her books have been finalists for the ACFW Carol Awards, the HOLT Medallion, and the Booksellers’ Best.

In March 2020, Amanda introduced her fans to the beautiful Texas Hill Country in Out of the Embers, book 1 in the Mesquite Springs Series. True to form, Cabot expertly blended history, romance, suspense, and an engaging cast of characters that have woven their way into the hearts of historical romance fans.

In this interview, Amanda discusses the much-anticipated series conclusion and her latest release, The Spark of Love. Expertly combining suspense with sweet romance, she will have readers wanting to pay a personal visit to Mesquite Springs.

FF: Can you please provide a brief description of your new book, The Spark of Love?
I’m always challenged by the word brief, but here’s a two-sentence synopsis. (You’ll note that they’re LONG sentences.) A private investigator determined to save others from suffering the same fate as his father finds more than he expects when he travels to Mesquite Springs to unmask a con man. Who would have thought that the woman who captured his attention on the stagecoach was both an heiress fleeing a dangerous spurned suitor and the daughter of the man he’s investigating?

FF: What was the inspiration for the book?
Family dynamics and the way our relationships with our families influence us fascinate me, which is why they became important aspects of the first two Mesquite Springs books. They continue to be critical elements in The Spark of Love, as I explore the effects of the decisions Alexandra’s and Gabe’s fathers made in the past. Without giving away too much, I can say that those decisions shaped their children in ways neither man might have expected or intended, ultimately leading both Alexandra and Gabe to Mesquite Springs.

FF: This series is set in a fictional small town in the Texas Hill Country called Mesquite Springs. In what ways does the town take on a character role of its own?
One of the things I’ve learned from my readers is that they love small towns as much as I do. There’s something special about the close relationships you find in a small town, the way residents band together to help each other . . . most of the time. On the other side of the equation is the ever-active rumor mill and the damage it can bring. I try to combine those two seemingly incompatible aspects of small towns and add a cast of continuing characters to create a place that comes to life and becomes a character in its own right. It’s always a thrill when readers tell me they pulled out a Texas map or Googled to search for one of my towns, because they were convinced it was a real place.

FF: Books 1 and 2 in the series, Out of the Embers and Dreams Rekindled, focus on characters who were born and raised in Mesquite Springs. The Spark of Love centers on two outsiders. Can you tell us a little more about these characters?
Bringing a newcomer to a town is like dropping a large rock into a small pond: it creates splashes and ripples that change the pond, or in this case, the town. Evelyn’s arrival in Out of the Embers and Brandon’s in Dreams Rekindled certainly changed Mesquite Springs. As you might expect, the appearance of two newcomers in The Spark of Love has an even greater effect than if there were only one unfamiliar face in town.

Alexandra Tarkington is far from the stereotypical heiress. She’s stronger than most women in her situation, determined to be loved for herself and not her inheritance. She also has a deep need to protect and help others, which leads her to teach Mesquite Springs’s schoolchildren to paint and to care for twins who’ve lost their mother.

Gabe Seymour hasn’t always been a private investigator, but after his father lost his life savings and his will to live as a result of a bogus investment, Gabe has made it his mission to ensure others do not suffer the same fate. He’s relentless, determined, and very good at what he does . . . until he meets Alexandra.

FF: Who is your favorite character from the town of Mesquite Springs?
This is always a difficult question to answer, since while I’m writing a book, my favorite characters are the hero and heroine of that particular story. But now that the series is complete, I have a slightly different perspective and have to admit that two of the secondary characters stole my heart—and that of many readers. The first was Polly, the young girl who plays an important role in Out of the Embers. I was so intrigued by her that I had to give her cameo roles in each of the following books. And then there was Nutmeg, the dog from Dreams Rekindled. She and her puppies were such favorites that I included them, albeit briefly, in The Spark of Love.

FF: Two men have followed Alexandra Tarkington to the Texas Hill Country. Each has his own agenda. Can you give us a hint about what their agendas are?
The short answer is, “No, not without spoiling the story.” Let me simply say that these are dangerous men with secrets of their own and a fierce determination to win at any cost.

FF: Your novels often include a variety of elements including romance, history, and suspense. Do you find it difficult weaving in all of these components?
Actually, I find it exhilarating, even though it has its challenging aspects. The challenge comes from trying to ensure that no one element overshadows the other. I want my readers to feel as if they’re experiencing life in the nineteenth century when they open one of my books, but I don’t want them to feel as if they’re reading a history book. And while I enjoy adding suspense and mystery to my stories, I don’t want them to overwhelm the romance. No doubt about it: at times it feels like a juggling act, but that juggling makes the writing process fun for me.

FF: What do you hope readers gain from reading The Spark of Love?
As always, I hope they’ll finish the book with a smile on their faces, a renewed belief in the healing power of love, and the knowledge that God can—and does—answer prayers.

FF: What new projects are you working on?
I’m currently putting the finishing touches on the first book in a new trilogy set in the fictional town of Sweetwater Crossing. Like all of my most recent stories, this series is set in the Texas Hill Country, but as a change of pace from the Mesquite Springs books, I’ve moved forward a few decades. The Sweetwater books take place in the 1880s and feature three sisters. As you might expect from my earlier comments, family dynamics play a role in the stories. There’s more than a little sibling rivalry involved as well as the mystery and suspense elements readers have come to expect from me. I’m having a wonderful time with this series and hope readers will enjoy their time in Sweetwater Crossing as much as they’ve loved visiting Cimarron Creek and Mesquite Springs. It’s a very special town with some unforgettable residents.

Book Summary:
When a spurned suitor threatens her, heiress Alexandra Tarkington flees New York for Mesquite Springs in the Texas Hill Country, where her father is building a hotel. But the happy reunion she envisions is not to be as her father insists she return to New York. Instead, Alexandra carves out a niche for herself in town, teaching schoolchildren to paint and enjoying the company of Gabe Seymour, a delightful man she met on the stagecoach.

But all is not as it seems. Two men, each with his own agenda, have followed her to Mesquite Springs. And Gabe is an investigator, searching for proof that her father is a swindler. When a series of apparent accidents threaten her life, Alexandra and Gabe will have to work together to discover the truth. And perhaps along the way they will discover that the sparks of attraction they’ve felt from the beginning are more than sparks—they’re love. 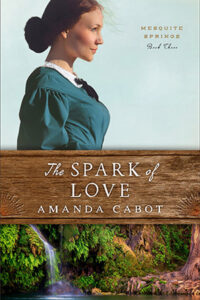 Buy The Spark of Love from the FF Store HERE!

Buy The Spark of Love from Amazon HERE!