The author of numerous novels and novellas, Regina Jennings has won a National Readers’ Choice Award and been a finalist for the Oklahoma Book of the Year. Her latest historical romance is the third title in her Fort Reno series, The Major’s Daughter (Bethany House): Caroline Adams returns to Indian Territory after tiring of confining society life. She wants adventure, and when she and her friend Amber come across swaggering outlaw Frisco Smith, they find his dreams for the new territory are very persuasive. With the much-anticipated land run pending, they may just join the rush.

Growing up parentless, all Frisco Smith wanted was a place to call his own. It’s no wonder that he fought to open the Unassigned Lands. After years of sneaking across the border, he’s even managed to put in a dugout house on a hidden piece of property he’s poised to claim.

When the gun sounds, everyone’s best plans are thrown out the window in the chaos of the run. Caroline and Frisco soon find themselves battling over a claim—and both dig in their heels. Settling the rightful ownership will bring them closer than they ever expected, and change their ideas of what a true home looks like.

In this interview, Regina outlines the historical context of the story, reveals the challenges she ran into, and shares what drove her to write it…

What’s the main conflict of this story? 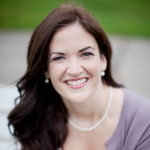 When Frisco mocked Caroline for her dependence on her parents, he never expected her to take his criticism seriously. He definitely didn’t think she’d compete in the land run and steal his homestead out from under him. He should’ve kept his mouth shut.

Convinced by Frisco that this opportunity must be grasped, Caroline can’t back down. Doing so would only prove to him that she can’t make it on her own. But to what lengths is he willing to go to win back his land?

The Major’s Daughter begins at the brink of the Oklahoma Land Run of 1889. What exactly is that all about?

The 1889 Land Run was perhaps the worst-organized government initiative in the history of the United States, and being the worst is quite an accomplishment. According to the Homestead Act of 1862, public domain land was eligible to be settled and won by homesteaders (men or women!) who could reside on the property for five years and make improvements on it.

As other homesteading areas filled up, people turned to the two million acres in the center of Indian Territory that the government was holding in reserve. This land was called “Unassigned,” as it wasn’t part of any Indian reservation.

After much petitioning, Congress decided to open it for settlement, but how would they decide who got one of the 160-acre plots? They couldn’t be bothered with the details. Instead, a date and time were chosen for when the land would become eligible (April 22, 1889, high noon), and the first person to reach a homestead after that could claim it as their own.

With tens of thousands of people racing for farms, what could possibly go wrong?

We’ve seen debonair Frisco Smith in the earlier Fort Reno books. Is his character based on anyone?

Frisco’s character was inspired by the self-made men of the western frontier. In the first books, he’s a charming scalawag who spends more time in the guardhouse at the fort than he does in the parlor.

In The Major’s Daughter, we learn that Frisco’s illegal activity had a purpose behind it. He wasn’t wasting time but educating himself in the peculiarities of the law and of the soon-to-be opened land. No longer a victim of circumstances, he’s prepared to be a leader in the new society.

Some books are tougher to write than others. What challenges did you run into with this story?

I tried something I’ve never done before—creating four point-of-view characters for two different romantic story lines. Besides Caroline and Frisco, we also get to check in on Bradley Willis and Amber Herald, who first met in Bound and Determined. I loved having their story continuing in the background as Caroline and Frisco are sparring.

Why write The Major’s Daughter?

Living in Oklahoma and writing nineteenth-century historical fiction, I knew that sooner (ha!) or later I’d have to write a land run story. It was inevitable. I couldn’t ignore the larger-than-life origin story of our state, but the land runs were so epic and unruly, the thought of getting them on paper was intimidating.

It still is intimidating, but I did it anyway. I’m glad I waited until I had a dozen or so books penned before I attempted it, because this might be the only story about our crazy land run that some reader ever reads, and I want to do it justice.

This is my love letter to my state. I hope readers get as caught up in it as the racers did that spring of 1889. 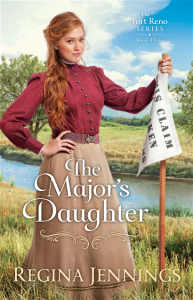