Rachel Fordham started writing when her children began begging her for stories at night. She’d pull a book from the shelf, but they’d insist she make one up. Finally, she paired her love of good stories with her love of writing and has not stopped since.

Her latest novel is the historical romance A Life Once Dreamed (Revell): Years ago, a shocking secret sent Agnes Pratt running in search of a new start—which she found in Penance, a rugged town of miners and lumberjacks in the Dakota Territory. When childhood friend and former sweetheart James Harris accepts a position as the town doctor, James wants to know why Agnes left behind the life they had dreamed of creating for themselves—but he’s precisely the one person who can never know.

In this interview, Rachel explains why she chose the setting of her story, the research that went into the book, and what inspired her to explore the subject of illegitimacy and its effects on one of her characters.

Rachel, please share with us a brief overview of your new novel, A Life Once Dreamed.

Six years ago, Agnes left James and the city behind and started a new life for herself in the Dakota town of Penance. James was left behind and brokenhearted, but he trudged on and became a doctor despite never truly losing his desire to be with Agnes. A Life Once Dreamed is the story of these two people, who’ve grown and changed, coming back together and asking themselves if there is a way for them to share a future.

Your two previous novels, The Hope of Azure Springs and Yours Truly, Thomas, take place in a fictional town in Iowa. Why did you choose the Dakota territories as the setting for your latest book?

I’ll always be fond of Azure Springs, Iowa, and would love to set a million books there. For A Life Once Dreamed, I needed a setting that was a sharp contrast to Buffalo, New York, where the book begins. I wanted a place that would still be rugged and, in many ways, isolated for my heroine to start her new life in.

Penance became that town. It’s full of heart and endearing characters, but it’s also a land that challenges the main characters and causes them to learn a new way to live and to look at life. I hope everyone will love this rustic town like I do.

What type of research did you do for the story?

There were many small things that required research—the climate, vegetation, and industry of the Dakotas. I also read up on the rules of etiquette in small rural towns and the life of a teacher. But the issue that required the most digging was illegitimacy and adoption laws of that era.

One of your main characters faces stigma for being an illegitimate child. What inspired this story angle?

The idea for this novel came after watching the movie Blossoms in the Dust. It tells the story of Edna Gladney, who was a pioneer in the fight against the illegitimate stigma. I watched this and couldn’t stop thinking about how sad it was that people’s lives were torn apart by something they couldn’t change.

After doing research, I discovered that in the time period of my story it was still somewhat possible to keep illegitimacy a secret because birth certificates and official birth records were just starting. Often babies were quietly claimed by someone else, but if their status was known they were often mocked, labeled, and legally discriminated against.

In my main character’s case, her status would have been revealed because of who she was marrying and who knew about her birth. Rather than face the community backlash and public shame, she flees, sparing herself and James.

In the years following when my story takes place, the government required the status of illegitimate children to be listed on birth records, and it wasn’t long before those children were harder to adopt out and labeled as inferior. It became much harder to hide, and the stigma grew even worse until people like Edna Gladney fought to spare these kids.

In today’s world, it seems foreign to most that illegitimacy was viewed with such scorn. Yet many of us, if we dig in our family tree, will find we have been touched by this in some way. Bringing a light to this once popular form of discrimination was not only a thrilling writing experience, but one I think is important.

What would you like readers to take away after reading A Life Once Dreamed?

Like always, I hope readers end the book with a happy sign and all the good feelings that rush over you when you’ve been swept away in an engaging tale. Then I hope they pause and think about what they read and realize they were more than merely entertained.

I’d love to know that readers left this story more aware of those around them. Illegitimacy may have lost its stigma, but there are still so many times when we are quick to judge someone based on factors out of their control. In addition, I hope readers will think about how sometimes the roads we travel in this life take us far away from what we were seeking but somehow take us to exactly where we are meant to be. 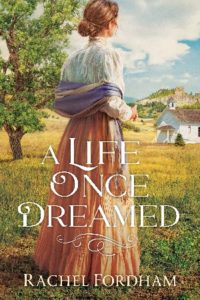 A Life Once Dreamed
Rachel Fordham
Revell
Buy the book from our store!