Lori Benton’s historical novels transport readers to the 18th century, where she brings to life the colonial and early federal periods of American history. Her books have received the Christy Award, the Inspy Award, and been finalists for the ECPA Book of the Year.

In this interview, the author compares and contrasts the new novel with her previous works, reveals the research that went into it, and shares some surprising details about the next book in the series.

How is Mountain Laurel different from your previous books? What made you want to write about this specific setting and situation? 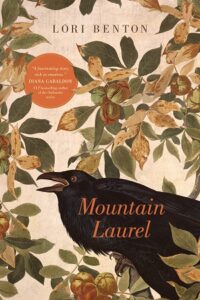 Mountain Laurel bears the strongest connection to my 2019 release, The King’s Mercy. Both tackle issues of slavery, freedom, injustice, and what it means to be family—the family we’re born to and the family we choose.

The rest of my previously published books have been set on the eighteenth-century frontier and deal with the collision of worldviews between Native Americans and European settlers. But in all my books you’ll find characters who have, willingly or not, crossed a line between cultures and find themselves irrevocably changed by the experience.

How I came to be writing about Mountain Laurel’s specific setting and situation is a mixture of the profound and the playful. The profound has to do with a book called Drums of Autumn by Diana Gabaldon. A minor character in that book, a slave called Josh, spoke with a Scottish accent though his ancestry was African. Josh had grown up hearing the speech of his Scottish owners, so that’s who he sounded like.

With this minor character, Diana broadened my understanding of how the unique circumstances of our upbringing help create who we become. We’re born with DNA that links us to a people group, but extraordinary influences can instill in us unique qualities not all in that group share.

Fascinated with the idea of creating such a character, I asked myself a string of what-if questions, which led to the characters of Malcolm, Lily, and Seona. I chose North Carolina for a setting because of all the Southern states, I’m most familiar with that one.

But when did I want this book to be set? The Revolutionary War movie The Patriot settled that. I fancied the look of the knee breeches the male characters wore. After learning when they went out of style (and not wanting to write about a war), I narrowed the time frame to between 1784 and 1800. I randomly picked 1793—a fortuitous choice, as readers of the book will discover.

What kind of research did you do to inform this book?

I initially researched and wrote Mountain Laurel from 2004 to 2009. Because Mountain Laurel was the first eighteenth-century-set book I’d ever written, I came to it largely ignorant of the time period. I had a considerable amount of research to do to make the world of these characters come alive with any hope of verisimilitude.

Having written and published six other eighteenth-century-set novels, the research for each built on the knowledge I acquired writing Mountain Laurel. That early research consisted of reading hundreds of books on topics ranging from eighteenth-century practical life (what they wore, ate, lived in, did for work and play) the history of colonial America and that of North Carolina, to more specialized topics like plantation economy, North Carolina’s slave laws, the beginnings of the Underground Railroad, Eli Whitney’s cotton gin, eighteenth-century thoroughbred breeding, the Scottish Jacobite Rising, how to construct a dovetail joint, treat malaria, and fire a black powder rifle.

I talked to an acquaintance who had been stalked by a mountain lion. I watched every YouTube video and documentary on the eighteenth century I could get my hands on, spent thousands of hours online, and took a memorable road trip through western North Carolina with the express purpose of reacquainting myself with a landscape last seen as a teenager. In other words, I immersed myself in the eighteenth century for five years, a process that continues.

What did you learn from writing Mountain Laurel?

Besides having to learn about chattel slavery and everything else touched on in this story, I learned a great deal personally through writing Mountain Laurel. In 1999, nine years into my writing journey, I was diagnosed with Hodgkin’s lymphoma and spent that year being treated. I was pronounced in remission by year’s end, when I presumed I’d pick up where I left off with the novel I’d been writing at the time of my diagnosis, only to find myself suffering an unexpected side effect of chemotherapy—chemo fog. I simply couldn’t meet the mental demands of novel writing.

In those days, my identity was wrapped up in being a writer. That had been stripped away, leaving me unsure who I was anymore, what I should be doing. Eventually I stopped spinning my mental and emotional wheels trying to get back what I’d lost and surrendered my passion for writing and the hope of being published. “Thy will be done” was my prayer and incidentally is a theme woven throughout Mountain Laurel.

Not until April 2004, with a vague notion of a story set during the 1700s, did I feel that old passion stirring in me again. But could I do it? Not just write a novel, but give myself what amounted to a history degree?

God was asking me to take a leap of faith, trust Him for healing, and begin. I did and along the way learned that God’s plans for me are good, but His timing is His own. I learned that writing must never again become an idol. I must hold it with an open hand.

I learned how to lean into Him daily for the clarity to write. My mind will never be as sharp as it was before chemotherapy, but in my weakness, He has shown His strength repeatedly.

What is your hope for readers of this novel?

Here’s a wonderful thing I’ve discovered over the years about celebrating the grace and redemptive power of Jesus Christ in the form of story. While I’ve had my conversation with the Lord about these characters and the themes I’ve explored with them, heard from Him and changed and grown in the writing, after the book is published, it becomes the reader’s turn.

It still amazes me how God can speak to each reader’s heart something unique. Whatever that turns out to be, my hope is that readers are drawn closer to the Lord through Seona and Ian’s story, and that they turn that last page of Mountain Laurel more in love with our gracious Jesus than when they began.

What can we expect from future books in the Kindred series?

Shiloh is the title of Mountain Laurel’s sequel, but it also happens to be a sequel to another novel of mine, Burning Sky.

While I’ve received requests from readers to write more of their favorite character’s story, no character has been the subject of more such requests than the Mohawk warrior Joseph Tames-His-Horse, introduced in Burning Sky. At last, I’ve found the way to grant that request.

While Shiloh is primarily the second half of Ian and Seona’s story, Joseph plays a significant role in it. If you haven’t met Joseph Tames-His-Horse, for the sake of his obviously compelling story having the greatest impact, I recommend reading Burning Sky before Shiloh releases in 2021.

Readers will also encounter other characters from Burning Sky, twelve years beyond the point that novel ended. Such tangled webs are bound to be woven when an author lets her characters wander from book to book, as I have freely done.