Well known for her authentic Regency romances set against less-explored, true historical backgrounds, best-selling author Carolyn Miller continues her newest series with a clean, wholesome tale sure to please her many fans. She continues her Daughters of Aynsley series with Underestimating Miss Cecilia (Kregel Publications). Cecilia Hatherleigh has many secrets in her shy, sweet heart—but none bigger than her unrequited love for Edward Amherst, the earl’s son next door. When misadventure strikes at a house party, these two are thrown together even as their lives are upended. In this exclusive interview, Carolyn shares a bit about the novel, explains how her different Regency stories fit together, and reveals why she keeps traveling back in time to the Regency period…

Carolyn, what can you tell us about Underestimating Miss Cecilia? (No spoilers!) 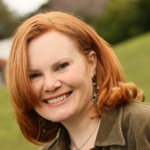 Underestimating Miss Cecilia is a Regency romance that involves such things as gypsies, the Peterloo massacre (the 200th anniversary is being commemorated in England in August this year), the legal system, a country house party, unrequited love and what happens to a prodigal son AFTER he returns.

Shy, sweet Cecilia Hatherleigh has always been in love with Edward Amherst, the boy next door. Yet he’s never seen her as anything but the quiet girl in the background as he flirts with the other vivacious women of the ton.

When a near tragedy brings Edward’s attention to his family duties, this prodigal son decides he needs to settle down with a proper wife. Cecilia hopes to convince him to choose her—but God may want her to forget the wayward nobleman and put her future in His hands alone.

These two try to find their way toward happiness, but prejudice, political riots, and the changing face of England’s societal structures begin to block them at every turn. Can their struggles turn to triumph—or will their paths permanently diverge?

This is the second book in the Regency Brides: Daughters of Aynsley series, which is actually my third Regency Brides series. It concerns Cecilia (Cecy) Hatherleigh, the middle daughter of Viscount Aynsley, whose eldest daughter (Caroline) we met in the first book of this series, A Hero for Miss Hatherleigh, and whose youngest daughter features in my November release, Misleading Miss Verity.

It’s been fun seeing this Regency world expand from Lavinia and Nicholas’s adventures in my first novel, The Elusive Miss Ellison. I’m sure readers from my earlier novels will enjoy catching up with some old friends and seeing what they’re up to now. 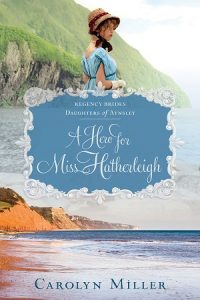 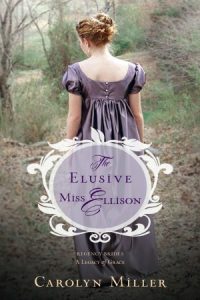 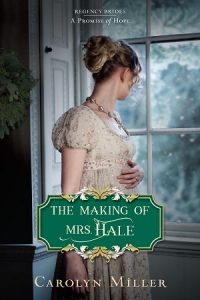 What can you tell us about Cecy and Edward? What about those two made you want to tell their story?

Have you ever wondered about what happened to the Prodigal Son AFTER he returned home? His dad was thrilled to see him, but his brother wasn’t, and I’m guessing there might well have been people in the community who weren’t so forgiving, either.

I wanted to explore what it would be like to be someone having to live a second-chance life, with all the prejudices involved. Ned Amherst (whom we first met in The Making of Mrs. Hale) proved to be the perfect vehicle for this.

Cecilia Hatherleigh (Cecy) is a shy, sweet, good-hearted girl–whose unrequited love for the boy next door is condemned by her parents. Cecy is a new believer, with a retiring personality that makes her the opposite of her more bold and forthright sisters.

Which makes this story a little more introspective, a little more angsty, and through her journals we see her heart struggles revealed–and makes the payoff of a swoonworthy romantic ending all the better!

What is it about the Regency period that makes you keep going back there?

There is simply so much to explore in the Regency period, which strictly speaking occurs between 1811-1820. Exploration, colonization, inventions, technological and social change, industrialization, parliamentary change, wars, greater awareness of social issues, all played significant roles in England at this time.

Humans haven’t changed that much over the past 200 years, and it’s interesting to see certain parallels between events from the early 1800s and current day. To place characters that resonate with readers in a setting that provides opportunity for such rich historical detail is truly enjoyable.

What do you hope readers will come away with after reading Underestimating Miss Cecilia?

Apart from enjoying an emotionally satisfying read with authentic period details, I really hope readers will be encouraged by Cecy and Ned’s journey to find true love and freedom in God. Some early readers have shared how Cecy’s desire for affection has mirrored their own struggles with idolizing things above God, which is a challenge we can all face at various times.

Ned, too, has his battles with understanding how vast God’s grace is–something I’m still learning myself.

An early reader recently wrote: “Carolyn Miller has penned something more than just a Regency-era novel. She has crafted a fictional place that allows the reader the opportunity to wrestle with various internal struggles and hopefully come out the other side stronger in relationship with God” (ChristianFictionGirl blog).

It’s exactly this. She’s encapsulated why I write so beautifully. I want readers to be encouraged and strengthened in their relationship with God and their awareness of His amazing goodness and grace. 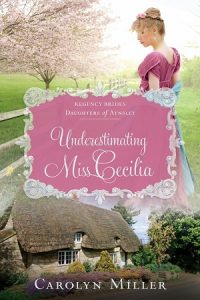