Tracie Peterson concludes her Heart of the Frontier series with Cherished Mercy (Bethany House), a tale that features danger, authentic spiritual challenges, and heartwarming romance. In 1850s Oregon Territory, tensions have reached the boiling point, and Mercy Flanagan is pushed to the limit of her strength. She and Adam must rely on their firm faith in God to make it out alive. In this interview, Tracie shares the spiritual themes of the story, what she hopes readers get out of it, and what she’s writing next… 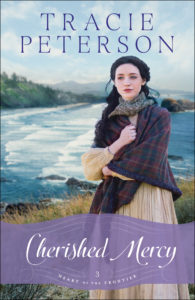 What is Cherished Mercy about?

This book is the conclusion to the Heart of the Frontier series—a story about three sisters who came west on the Oregon Trail to start a new life. Cherished Mercy picks up a few years after book two, Beloved Hope, and focuses on the third sister, Mercy Flanagan. Mercy is trying to figure out what God wants her to do with her life. She loves teaching, and when the opportunity comes to go to the Rogue River area of the Oregon Territory to help some friends at their mission for the local Native Americans, she believes this is God’s job for her.

When she gets there, however, she finds her past experiences with Indians and her new experiences are quite different. Then there’s also the complication of the young pastor who is helping at the mission. Conflict arises in a twist of history that puts the white settlers as the aggressors, and somehow through it all, Mercy finds a way to deepen her walk with God and fall in love.

Why did you want to tell this story?

Throughout this series, I was determined to show the history of the Oregon Territory’s early years and the conflict of settlers and natives. In the 1840s and ’50s the government’s attitude toward the Native Americans shifts from an occasional conflict to all-out war. The government sends the army west to establish forts, and an attitude of Native American “Indian” annihilation is sanctioned.

Book one, Treasured Grace, dealt with an attack at the Whitman Mission on the white population there. Cherished Mercy comes full circle to show whites attacking in unprovoked manners the various tribes along the Rogue River. But beyond the history of the day, I wanted to show Mercy Flanagan’s romance, as well as some conclusions for other members of the family.

Did you do any special research for this story?

Yes. I had a great deal of fun, in fact. I got to take a jet boat ride up the Rogue River to the area where my story takes place. It’s still very isolated and not overly populated, and the area I went to was quite unspoiled, so it really took me back to the time of my story. I was able to talk to various people about life on the river, research museums and a great many books, and connect with the history of Oregon. I think it served to make the story stronger and more vivid.

What kind of spiritual theme did you use for this story?

This entire series had a strong theme of the need for forgiveness and how anger, revenge, and hatred only serve to bind the one holding those feelings. There are many situations where falsely judging others is also a strong theme. The world often bases a person’s value on their appearance, and my story shows that attitude was no different back then. It’s also a story about being cautious in jumping to conclusions. God is always in the mix, and sometimes things don’t look like we think they should. We need to learn to trust Him with each circumstance and seek to learn what it is He’s trying to teach us.

In keeping with the spiritual theme, what do you hope the reader takes away from this story?

I’d like them to see the truth about our history, for one thing. So often people are quick to blame one side or the other when it comes to fights and wars, but the history of this Territory clearly shows there were issues and problems on both sides. I’d like to think the story would make the reader think about how conflicts are usually born out of fear and escalate in misunderstanding and misconception. I’d also like the reader to find value in the Biblical application woven throughout the story.

Since this is the end of the series, is there anything you’d like to say about the next project to come?

A new series will debut in March 2018 that deals with the 1906 earthquake in San Francisco and three young women who meet by chance to become inseparable friends. There will be romance and intrigue, as always, with a turn-of-the-century flare. It’s a big jump from the 1850s to the 1905-1907 time period, but I think readers will enjoy the contrast.