Michelle Shocklee is the author of several historical novels, including Under the Tulip Tree, a Christy Award finalist. Her work has been included in numerous Chicken Soup for the Soul books, magazines, and blogs. Married to her college sweetheart and the mother of two grown sons, she makes her home in Tennessee, not far from the historical sites she writes about.

In this interview, Michelle discusses her latest novel, Count the Nights by Stars.

FF: Have you always loved books and reading?
Yes! I grew up in a home filled with books of all different genres. Both my parents and all four of my siblings enjoy reading. Mom was an elementary school teacher for nearly thirty years. The day the Scholastic book orders arrived in the mail felt like Christmas. Dad loved books on history, especially World War II. He was a turret gunner on a B-17 bomber in Europe and had a nice collection of books about Flying Fortresses and the war. I now have those fascinating books in my home library since Daddy graduated to heaven several years ago.

FF: What about your formative years informed your love for reading and books?
I feel very blessed to have had a mom who read to us, even after we learned to read for ourselves. One of my favorite memories is from the summer when she read Little Women to my sister and me. I can still picture the scene: I’m sprawled out on the carpet in our den, my older sister is lounging in the rocking chair, and Mom is on the couch, reading until her voice grew hoarse. I have that beloved book on my own bookshelf these days and it always brings a smile and sweet memories.

FF: How did you become a writer?
I was a married mother of two rambunctious boys when the writing bug bit me. I didn’t know anything about writing a novel, but I wanted to give it a try. Personal computers were just becoming popular, so my husband brought one home and I began writing my first novel. I knew I needed help, so I attended a Christian writers’ conference where I had the privilege of learning about the craft from the amazing Francine Rivers. Lots of life and lots of stories later, my debut novel was published in 2017.

FF: What made you want to write historical fiction? What about that genre do you enjoy?
The day Mom brought home a newly released novel called Love Comes Softly by Janette Oke was the day I fell in love with the genre of historical fiction. I can’t tell you how many times I’ve read that novel since that long-ago day in 1979. Like my dad, I love history. To have a story carry me to a time and place I’ll never experience in real life was amazing. One of the things I love most about writing historical fiction is the research that goes into each book. I learn so many fascinating details about people from the past and places I’ve never been to through research.

FF: How did you decide to write a time-slip novel set in 1897 and 1961?
When I first read about the Tennessee Centennial Exposition of 1897, I knew I’d have to write a book about this one-of-a-kind event someday. I had the same feeling when I learned about the famous Maxwell House Hotel. Although the hotel was built in the late 1850s and was used by both armies during the Civil War, 1961 was an unforgettable year in the life of the Maxwell House. Bringing the two time periods together into one book was great fun.

FF: What inspired you to write this particular story?
When my husband and I moved to the Nashville area in 2017, I felt like a sponge soaking up all the interesting history of the area. One of the most fascinating places we visited was the Parthenon, a full-scale replica of the real Parthenon in Athens. Discovering that it was built for the Tennessee Centennial Exposition in 1897 sent my imagination into overdrive, and Priscilla’s story soon immerged.

FF: Please tell us a bit about the setting of your novel.
Count the Nights by Stars is set in Nashville, Tennessee, in 1897 and 1961. In both time periods, the Maxwell House Hotel is as much a character in the story as are Priscilla and Audrey. Readers will experience the bygone days of Nashville when people traveled by horse and carriage as well as the early days of the Civil Rights movement. The Tennessee Centennial Exposition is brought to life in Priscilla’s story, and I believe readers will enjoy learning about Tennessee’s 100th birthday celebration.

FF: How much research did you have to do on the time period and setting for your novel?
Much research went into both time periods. I found a fantastic book about the expo, read official documents, and studied dozens and dozens of black-and-white pictures during the writing process. My hope is readers will feel as if they’ve truly been to the centennial exposition after reading Priscilla’s story. I also tried to capture the unique vibe of 1961 within the pages of Audrey’s story by including lots of references to music, clothing styles, and important events.

FF: Please tell us about your main characters in Count the Nights by Stars and what kind of challenges they face.
Priscilla, the protagonist in the 1897 story, resists being forced into a loveless marriage to a family friend. More than anything, she wants her life to matter. When a young friend goes missing, a calling to help women of ill repute is awakened in Priscilla. She knows, however, if she chooses this path, life as she knows it will never be the same. Audrey, the protagonist in the 1961 story, has recently suffered the loss of her mother and finds herself responsible for the care of her older special-needs brother. When she discovers an old scrapbook belonging to a longtime resident of the Maxwell House Hotel, she’s inspired to learn more about the reclusive woman and the surprising path she took into social work.

FF: Who was your favorite character to write and why?
It’s always difficult to choose a favorite character, because I love each one for different reasons. In this book, I think Priscilla would have to be my favorite. She could have easily chosen a life of luxury and ease, but instead she followed her heart and faced challenges and pain with courage and faith. She’s determined to make an impact on her small part of the world, and I think that’s how most of us feel.

FF: What lessons can be learned from your main characters?
Both Priscilla and Audrey learn the valuable lesson of truly seeing people. All too often we don’t take time to get to know others and instead make hasty judgements about them. Yet when we really see people and listen to their stories, what we first believed may not be true at all.

FF: What are the key themes in Count the Nights by Stars?
“I see you” is the main theme of the book. Each of the main characters has someone in her life who challenges her and her preconceived beliefs, forcing her to reevaluate what she thought she knew and understood about the world. “Love thy neighbor” is also a theme throughout the pages of the story. “Who is my neighbor?” each of the characters must ask themselves. Their answers are, I hope, the same answers you and I would come up with.

Book Summary:
Count your nights by stars, not shadows. Count your life with smiles, not tears.

1961. After a longtime resident at Nashville’s historic Maxwell House Hotel suffers a debilitating stroke, Audrey Whitfield is tasked with cleaning out the reclusive woman’s rooms. There, she discovers an elaborate scrapbook filled with memorabilia from the Tennessee Centennial Exposition. Love notes on the backs of unmailed postcards inside capture Audrey’s imagination with hints of a forbidden romance . . . and troubling revelations about the disappearance of young women at the exposition. Audrey enlists the help of a handsome hotel guest as she tracks down clues and information about the mysterious “Peaches” and her regrets over one fateful day, nearly sixty-five years earlier.

1897. Outspoken and forward-thinking, Priscilla Nichols isn’t willing to settle for just any man. She’s still holding out hope for love when she meets Luca Moretti on the eve of the Tennessee Centennial Exposition. Charmed by the Italian immigrant’s boldness, Priscilla spends time exploring the wonderous sights of the expo with Luca—until a darkness overshadows the monthslong event. Haunted by a terrible truth, Priscilla and Luca are sent down separate paths as the night’s stars fade into dawn. 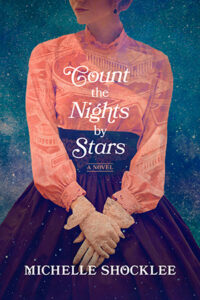 Buy Count the Nights by Stars from the FF Store HERE!

Buy Count the Nights by Stars from Amazon HERE!