Home
Features
After a long hiatus from bookshelves, the blockbuster author returns with Illusion (Howard Books), a novel that blend elements of suspense, mystery and sci-fi. But, he says, the novel is ultimately a celebration of love.

Even with 15 million books in print, there is still awe in Frank Peretti’s voice when he talks about storytelling. “Stories can speak to the heart in a very special way,” he says. “That’s what novels do. They reflect the human experience. We identify with the characters, feel the same emotions, the realization and awareness. Stories work.”

He ought to know. Ever since his first novel This Present Darkness hit shelves in 1986 and its sequel Piercing the Darkness followed in 1989, readers across the globe have clamored for more stories from Frank Peretti. It’s been six years since his last novel Monster graced the bestseller lists, but this March, Howard Books will release Illusion, the novel we’ve all been waiting for.

“If people have picked up my Darkness books and read them thinking they’re the kind of books I write, they’re going to find a big, big difference in Illusion,” Peretti says. “I write from my heart wherever the journey takes me. Illusion is a book written by a 60-year-old man who’s lived and loved his wife for 40 years and is basically writing about it. That’s a much different book than one written by a man in his 30s who’s all gaga about angels and demons.”

With elements of suspense, mystery, and sci-fi, Illusion tells the tale of Dane and Mandy Collins. For nearly 30 years they’ve been a popular magic act, sticking together through thick and thin. Then Mandy is killed in a fiery car wreck. Or is she? Playing with the idea of characters crossing dimensions and transversing space, Illusion asks the question, what if you could revert a person back to a previous state? “You know how computers are these days,” Peretti says. “You can take them back to the way they were months ago. That’s the concept for this whole experiment, this reversion, that goes on in the book. Mandy is surreptitiously carried away at the point of death and reverted, accidentally, 40 years. 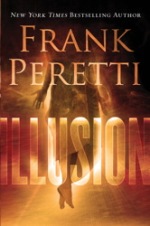 “[But at its heart] this novel is a celebration of love and commitment. My favorite part was living and feeling vicariously through Mandy and Dane my own relationship with my sweet wife, Barbara. There’s a lot of me and Barb in this book. Of all the characters I’ve written, right now Mandy is my favorite because she so perfectly embodies faith and hope. She doesn’t give up. She trusts God even when she thinks she’s crazy in a world where nobody knows her and she has no identity. She still clings to the Lord for her security. She’s a Seabiscuit. She’s a Rocky. She’s just gonna fight her way through and survive.”

Many of Peretti’s early works have been blatantly evangelistic in their tone and content, but Illusion takes a more subtle approach. “I’m kind of in C.S. Lewis mode here,” Peretti adds. “This one is more metaphorical. It’s the whole gospel, but it’s all couched in a different kind of world. If I can just write a story that talks about how beautiful a love relationship can be, and how wonderful it is for people to be married and in love for 40 years, that in itself is message enough! Illusion is a story of love.”

A firm believer in the power of Christian fiction, Peretti doesn’t take for granted his calling to build up the body of Christ. “What’s art for?” he asks. “It’s to communicate ideas on an aesthetic level. The best way to understand the human experience is through a Judeo Christian worldview, because that’s where everything falls together and makes sense. I’m a storyteller. My role is to tell a story because a story can give a whole other dimension to a thought.”

This feature originally appeared in the FamilyFiction Edge Feb/Mar 2012 issue.