Lindsay A. Franklin has created a world of literary magic in The Story Peddler (Enclave), the first book in her Weaver Trilogy. When a tale of treason spills from her hands, Tanwen flees for her life from the king’s guard—but soon discovers she’s not the only outlaw in the empire. In this interview, Lindsay shares about the series, how she built the world of the trilogy, and the challenges of keeping her fantasy fiction grounded in a biblical worldview…

What inspired The Story Peddler? 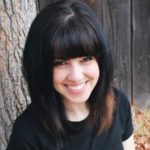 I was sitting in a workshop at a writers’ conference, and an acquisitions editor for a large publishing house was explaining her role in the publishing process beyond what aspiring writers typically saw her doing (rejecting our pitches). Whatever tiny handful of stories she liked and wanted to acquire, she had to turn around and pitch to her bosses, the publishing executives.

She made a comment—something like: “I have to peddle your stories to executives. At the end of the day, I’m just a story peddler.” My fantasy brain went wild. I thought of what a “story peddler” might look like if we added a little wonder and a sprinkling of fairy dust to the equation. A character emerged who might be a fun vehicle for this story-peddling process, and then I imagined a story around her. The rest is history.

What can you tell us about the overall series?

The Weaver Trilogy is a celebration of art and creativity. I consider creativity one of our most precious gifts from our Creator. We reflect Him so clearly when we create and build and imagine. His imagination is pretty wild, when you think about it.

On a personal level, I always use my fiction to explore things that sting a little too much to explore them in real life. Fictional stories feel like safe zones to work out emotions associated with raising a child who has a very scary medical condition (The Story Peddler), childhood abuse (the second book in The Weaver Trilogy), or the darkness of what my life looked like before I came to saving faith in Jesus (my first fantasy series, yet unpublished).

When I can explore what I’m feeling through fictional storylines and characters, it helps me unravel those knots in real life, no matter how messy and complicated things are.

How did you go about building the world for this trilogy? 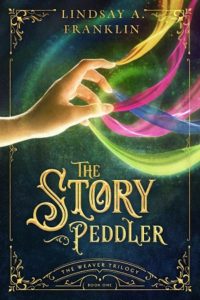 Well, I’ve done it twice for this story. My first draft had the same basic concept as the final story, but my agent rightly felt like something wasn’t working. My very first fantasy manuscript was overtly allegorical and obviously Christian, and in my first attempt with The Story Peddler, I tried to follow that pattern.

But it’s not what this story needed. So when I went back to the drawing board and tried to figure out what this story really wanted to be about, I realized it was about art, not allegory. Once you figure out the heart of your story, building a world around it doesn’t seem so overwhelming.

On a practical level, I use medieval history (mostly) to lend authenticity to the culture and technology of The Story Peddler’s world, and as a nod to part of my heritage, the language of the Tirian Empire is based on Welsh. Languages aren’t my forte (I’m not Tolkien!), and I discovered early on that using an existing language as a base helped lend consistency to my fantasy languages.

What are the challenges of writing something “fantastical” while keeping it inside a biblical worldview?

Oh, this is a tough question for Christian authors who write speculative fiction. Believe me when I say we discuss it all the time. Where are the lines? What should be off limits for us? How can we use our stories to glorify God and not accidentally glorify things that are not of God? We wrestle with this stuff a lot.

For me, I always keep in mind that my wild, sometimes weird, imagination is something the Lord gave me. Just as he gave me the ability to communicate through words. It’s okay to explore that wildness. But I also need to use the spiritual discernment and access to biblical truth that He has given me. At the most basic level, I never want to call evil good and good evil in anything I write.

What do you want readers to take away after reading The Story Peddler?

Creativity is a gift that reflects God, and everyone has it in some measure. We might express it through story, art, song, or the stage, but we might also express it by building things, designing things, growing things, or even figuring out a solution to a difficult problem.

There are a lot of threads in The Story Peddler fabric—humor, heartache, wonder, intrigue, politics, adventure, coming-of-age, the search for purpose, and even a little romance—but I think this celebration of creativity is at the core of the story.