Nashville, TN (January 10, 2023)
Christian fiction author Elizabeth Camden is best known for her historical novels set in Gilded Age America, featuring clever heroines and richly layered story lines. Before she was a writer, she was an academic librarian at some of the largest and smallest libraries in America, but her favorite is the continually growing library in her own home. Her novels have won Christy, Carol, and RITA awards and have appeared on the CBA bestsellers list. She is set to release the third book in her popular The Blackstone Legacy Series, titled Hearts of Steel, on January 17, 2023.

Book Summary:
His steel empire has catapulted him to the top of the world, but loving her could cost him everything.

Maggie Molinaro survived a hardscrabble childhood in the downtrodden streets of Manhattan to become a successful businesswoman. After a decade of sacrifice, she now owns a celebrated ice cream company. But when she offends a corrupt banker, she unwittingly sets off a series of calamities that threaten to destroy her life’s work.

Liam Blackstone is a charismatic steel magnate committed to overhauling factory conditions for the steelworkers of America. Standing in his way is the same villain determined to ruin Maggie. What begins as a practical alliance to defeat a common enemy soon evolves into a romance between two wounded people determined to beat the odds.

A spiraling circle of treachery grows increasingly dangerous as Liam and Maggie risk their lives and fortunes for the good of the city. It will require all their wit and ingenuity to protect everything—and everyone—they hold dear. 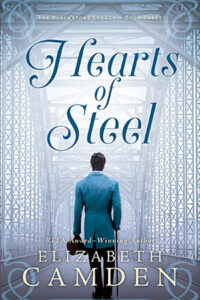 Buy Hearts of Steel from the FF Store HERE!