Author A.S. Mackey has written multiple children’s stories, and has authored several non-fiction ESL books for young children with a Norwegian ESL app designer. Her debut children’s novel is The Edge of Everywhen (B&H Publishing). Written for Middle Grade readers, The Edge of Everywhen bridges the chasm between faith-based and fantasy kid-lit genres. In our exclusive interview, the author shares with us her multi-faceted inspirations for her story, unpacks why including a protagonist on the Autism Spectrum was so important, and explains why the appearance of one of her characters surprised her the most.

What inspired you to write The Edge of Everywhen?

It all started with a social media post! I saw a random post early in 2015 in which someone wished that there was such a thing as “The Book of Requirement.” I decided to craft a story about a magic book that knows what story each reader needs to hear. As a Christian, I believe that the story we need to hear is the one God is telling us about who we were meant to be, so that’s the path I took.

Phoenix is autistic—does this aspect play into the story? Was it challenging?

I’ve learned so much about Autism Spectrum Disorder while researching the character of Phoenix! My nephew has autism, and I have several friends with children on the spectrum.

I wanted to be sure not to assert that a magic book could heal a child of autism, because that would be callous and insensitive. I reached out to my friends with kids on the spectrum, and one very special beta reader spent a great deal of time with me discussing Phoenix’s character, and she told me what worked and what didn’t. (Thank you, Talitha!)

As far as how the autism aspect plays into the story, I wanted to show the incredible bond that siblings of special needs children often share, and Piper truly loves her little brother. Another reason to include Phoenix is that young readers will likely know a classmate with autism or other special needs.

My hope is that Phoenix’s character may encourage kids to reach out and befriend other children who are vastly different from themselves.

Did any of the characters surprise you as you wrote the story? What was the most challenging part to write?

Novus Fabula surprised me! He is the omniscient narrator, but he is also a character of sorts. When I first drafted the novel, it was written from the third person point of view, primarily focusing on Piper, and it just lacked that “oomph” that the manuscript needed to set it apart.

Once I had the basic story complete, I took some time off from editing to read every book I could find about libraries and books bookstores and all things literary. I found my way to one of the most charming children’s books I’ve ever read called The Fantastic Flying Books of Mr. Morris Lessmore by William Joyce.

(Have you read that book? Have you seen the animated version? It won an Oscar in 2012, and it’s simply stunning.)

William Joyce did an incredible job giving the books in his story thoughts and feelings and emotions. I love personification as a literary device, so I decided that my magic book would benefit from becoming sentient. It was so fun, trying to imagine how the book might feel when it was being read.

The most challenging part for me wasn’t a character or a specific scene; it was the prose. I adore beautifully written prose, such as that found in Life of Pi, The Book Thief, or The Tale of Despereaux, and I wanted my book to consist of prose that was (I hope!) on par with those award-winners. I read oodles of incredible fiction, and I spent many hours revising and tinkering with the prose so that I could offer readers something that was well-written.

What are the spiritual themes within the story?

The key themes are grace, hope, and reconciliation. We are all faced with difficult people or difficult situations at times in our lives, and grace is what enables us to be kind, to offer forgiveness, and to keep from falling into bitterness when we’re in the midst of trying circumstances.

Hope is the evidence of things unseen. Hope dispels fear. And holding onto hope, even in the face of confusion and pain, is an act of faith that better days are coming.

Reconciliation is the heart of God, and He longs to see broken families restored, and many of us today have estranged family members with whom we long to be reconciled. All of these themes are present in one way or another in readers’ lives.

The Edge of Everywhen doesn’t answer every deep question or offer pat answers to questions of trauma. But we’re all on a journey, and I think that Piper’s journey will resonate with readers of all ages.

What would you like your readers to take with them after reading The Edge of Everywhen?

I hope they think deeply about their families; the good parts, the confusing parts, and the broken parts in which they may have a role in mending. I also hope that readers will see that faith is for everyone. Piper is a normal girl with normal fears and big questions, just like every other middle-school kid.

I hope readers will begin to ask those big questions of God, because I know He will answer them. We serve a mysterious, supernatural, living God, who was a pillar of fire by night and a cloud by day for an entire generation of people. He spoke through a donkey; He walked on water; He healed the blind; He raised the dead.

And the Bible doesn’t say that God’s supernatural qualities are any less today than they were thousands of years ago. I hope that readers will embrace the truth that God is limitless, and that He can make His presence known however and whenever and wherever He chooses. 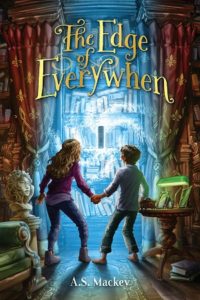 Buy The Edge of Everywhen in our store HERE!