Home
Features
“I am continually amazed
at the impact a simple,
carefully worded story can
have on young lives.
Nothing quiets them more
quickly or so completely
captures their curiosity.”

Author, pastor, and Insight for Living founder
Charles Swindoll has teamed up with
Providential Pictures and Tyndale House to
produce the new animated series Paws &
Tales, the latest variation on Swindoll’s 1995
storybook Paw Paw Chuck’s Big Ideas in the
Bible (Thomas Nelson). In the book, the
author used friendly forest animals to make
Bible stories and concepts relatable for young
children. The idea spawned a radio series in
2001, Paws & Tales, which has aired on more
than 450 radio stations. The animated series
was introduced last summer on TBN’s
children’s network Smile of a Child.

In each Paws & Tales story, the cast of
creatures takes part in fun adventures and
relatable situations in their community of
Wildwood, teaching young children important
Biblical truths. “Laying a good spiritual
foundation in your children is essential,”
Swindoll explains. “And even better when
it’s reinforced early and often. Paws & Tales
is a great tool for helping you build godly
character into your kids.”

The first of 13 planned DVDs, God Cares for
You is based on Psalm 23:1 and Proverbs 10:25.
Each DVD will include two
stories, catchy songs, music
videos, an ebook, activities
and a parent’s guide.
Notes Swindoll: “Our
hope and prayer is
that every episode of
Paws & Tales will
provide families with
more opportunities
to discuss the really
important things
in life.”
—Ben Avery 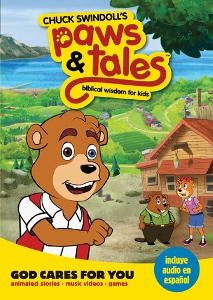 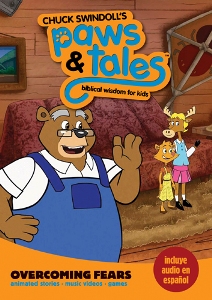