Bryan Litfin is the author of The Conqueror and Every Knee Shall Bow, as well as several works of nonfiction, including Wisdom from the Ancients, Early Christian Martyr Stories, After Acts, and Getting to Know the Church Fathers. A former professor of theology at the Moody Bible Institute, Litfin earned his PhD in religious studies from the University of Virginia and his ThM in historical theology from Dallas Theological Seminary.

FF: Can you please provide a brief summary of your novel Caesar’s Lord?
The novel takes place in the fourth century AD, the age of the ancient church in the Roman Empire, though it’s a few centuries after the time of the apostles. It’s the story of how the early church transitioned from an age of persecution to formal acceptance by the imperial government under Emperor Constantine. Along the way, the characters interact with all the great events and ideas of the ancient church, such as the Nicene Creed, the formation of the biblical canon, and the discovery of the Empty Tomb of Christ in Jerusalem.

FF: You have an extensive academic background. How does your background inform your writing?
That’s right, ancient church history has been my field of academic expertise for almost thirty years. I’ve published widely in this field in a nonfiction context, but fiction is my way of telling a great story for a broader readership. My novels are grounded in historical realism, and I know all the right subjects to talk about and weave into the plot. However, these novels aren’t dry history textbooks. They’re full of great drama and adventure!

FF: What drew you to the story of Rex and Flavia?
The fun thing about Rex is that he’s this great warrior from Germania with a big heart. He is what you would call a “barbarian” trying to figure out how to live in civilized Rome. Strong, manly, but maybe a little rough around the edges. And he doesn’t start out as a believer in God. He worships the pagan gods. So Flavia has this refining effect on him because she’s already a believer in Jesus. She is part of the little c “catholic church” of those times. But she’s a brave and heroic character in her own right. Together, they have a great effect on one another. They drive the plot forward equally.

FF: What inspired you to write about this particular era with your Constantine’s Empire Series?
It’s such a pivotal era in church history. I would say that no other twenty-year span brought about more change for Christianity than the years of AD 310–330. Emperor Constantine fundamentally changed the church’s relationship to its culture. This is, on the one hand, a good thing, because believers were no longer being tortured or thrown to the lions. Yet new challenges were presented as well. This was also the age when Christians began to build beautiful churches, make Holy Land pilgrimages, finalize the canon of Scripture, and formally express the doctrine of the Trinity. Pivotal!

FF: How do you handle writing the struggle with temptation, particularly in the case of Flavia?
One of the things I tried to do in this series was to present all the big topics of the ancient church. So you get doctrines and heresies, you get biblical interpretations, you get the life and practice of how the ancients did church or how they experienced persecution. And one of the main topics the early Christians talked about was how to live holy lives…which was countercultural for them, because the pagans were so unholy and sexually loose. It’s an important topic that we can’t skip over if we want to tell their whole story. So you have to show the characters striving for God’s moral standards against real temptations. Sometimes the characters have to fail for the story to truly present God’s grace and forgiveness. And it’s not just sexual temptation. The larger temptation is to rely on other things—gods, idols, power, riches, one’s own abilities—rather than Jesus the Lord.

FF: Caesar’s Lord is the final volume in the Constantine’s Empire Series. What is the connecting element for all of the books in this series?
It’s the idea of “lordship.” All the books have that theme. The Conqueror. Every Knee Shall Bow. Now, it’s Caesar’s Lord. The question is, Who will bow and who will reign? Will Jesus be Lord? Will he conquer the empire that crucified him? Will mighty Constantine allow Jesus to be his Lord? Will each of the characters, who are everyday believers, allow the lordship of Christ to permeate all the corners of their lives…even those parts they want to hold back? It’s a question for every believer.

FF: Are there any threads that run through the whole series that will be wrapped up in this book?
One thread is the ongoing saga of Rex and Flavia. They first meet each other as teenagers. They fall in love. Spoiler alert…they eventually marry. Will they have children and start a family? How will they overcome all their challenges and find a place of fruitfulness and a hopeful future? A second thread is this idea of the empire bowing the knee to Christ. You could say that this book depicts a macro struggle between Jupiter and Jesus. For centuries, Rome was under the gods. Now the true God has come to earth in Jesus of Nazareth. Though he was rejected by Pontius Pilate on behalf of Rome…will that always be the case? Or will the Christian church finally assume its place as the main shaper of culture and society? The historical answer is yes, it did…and this is the story of how it happened.

FF: What do you hope readers will gain from reading Caesar’s Lord?
Because I’m a teacher and a scholar, people might think I want my readers to gain “learning” or “new understanding.” I do like when that happens, but it’s secondary for me. The first and foremost goal I have is to sweep the readers up into a great saga, a grand adventure that makes them forget the present world and takes them to another time and place. I want my readers to be entertained in that way. But as they are swept away like that, they might also perceive the early Christians in a new light. I want today’s Christians to have a sense of solidarity with their forefathers and foremothers in the faith. I want them to feel connected to all the ages of church history, not just our own modern times. That is a huge value of mine.

Book Summary:
After more than a decade of unrest, Roman warrior Rex and his beloved wife, Flavia, are thankful to the God they serve for the peaceful life they are living in Alexandria. But with the empire in flux, their tranquility cannot last. When Rex is called away to serve Constantine in his fight against Licinius, Flavia’s loneliness and longing for a baby lead her down the road of temptation. Perhaps one of Egypt’s gods will grant her conception?

As battles rage, Rex and Flavia will have to rely on God’s forgiveness and protection if they are to survive the trials to come. Their adventures sweep them into the great events of the ancient church, including the forging of the Nicene Creed, terrible murders within the imperial family, the quest for the true cross of Christ in Jerusalem, and the end of pagan Rome as a new Christian empire dawns upon the world. 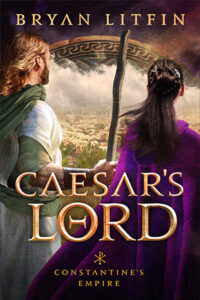