Bryan Litfin is the author of The Conqueror, Every Knee Shall Bow, and the Chiveis Trilogy, as well as several works of nonfiction, including Early Christian Martyr Stories, After Acts, and Getting to Know the Church Fathers. A former professor of theology at the Moody Bible Institute, Litfin earned his PhD in religious studies from the University of Virginia and his ThM in historical theology from Dallas Theological Seminary. Bryan is head of strategy and advancement at Clapham School, a classical Christian school in Wheaton, Illinois.

Bryan first introduced readers to his Constantine’s Empire Series with The Conqueror. Combining his knowledge as a renowned historian and theologian with his talent for storytelling, Litfin transported readers into perhaps one of the most pivotal eras in all of history. Now he continues the captivating tale in his new book, Every Knee Shall Bow.

FF: Every Knee Shall Bow is the second book in the Constantine’s Empire Series. Can you please provide a brief summary of this book?
It is the early fourth century AD. Christianity is on the rise in the Roman Empire. Persecution is coming to an end. Emperor Constantine has converted to Christ and is known to support the faith. In this context, the bishop of Rome sends some emissaries to the emperor for a great twofold task. The bishop wants permission and imperial funding to erect great churches around his city (including today’s St. John Lateran and St. Peter’s Basilica at the Vatican) and to copy a beautiful version of the Bible that will define the canon forever. But evil forces do not want this mission to prevail. The protagonists battle pagans and Gnostics through wars, secret plots, and many dangers to see the bishop’s mission prevail.

FF: This book is a continuation of the stories of Rex and Flavia, your two main protagonists. Can you tell us a little more about each of their characters?
Rex is a Germanic warrior who came into the Empire as a youth when he was recruited as a special-forces operative in the Roman army. He’s a typical brave hero—somewhat of a rogue at times. He has not yet converted to Christ but worships Hercules. He’s in love with Flavia, but he knows that his pagan worship and background as a killer put him at odds with her.

Flavia was the daughter of a senator but has left that life behind to become a nun. She loves Rex, but she knows she can’t be with him unless they share a faith. She is pious and godly, yet not shy and retiring. Flavia is brave, bold, and beautiful. The bishop of Rome has tapped her to be one of the leaders of the mission to Constantine.

FF: Where does book two pick up in their story together?
The previous book ended with the characters being separated against their will. Now it is three years later, and each does not know where the other lives. Rex is rowing a Roman galley for the navy. Flavia is a nun in Sicily who longs to be reunited with Rex. The plotline inexorably drives them together, then they join forces to carry out the pope’s mission.

FF: Can you provide a brief refresher about why this period in ancient history is so pivotal?
The early fourth century was when the age of persecution ended and the early church gained imperial support. This opened up many new opportunities but presented challenges as well. It was an age of clarification of the biblical canon and the beginnings of great Christian architecture. The gods were dying, Christ was on the rise, and “Jesus is Lord!” was on the lips of many. Soon, Christianity would become the official religion of the Roman Empire and paganism would be no more. “At the name of Jesus every knee should bow, in heaven and on earth and under the earth, and every tongue acknowledge that Jesus Christ is Lord” (Phil. 2:10–11 (NIV)).

Rex and Flavia must travel across the empire to deliver a message to Emperor Constantine. Without giving away spoilers, can you tell us about some of the biggest obstacles they’re up against?
Constantine must fight two battles against his rival (and brother-in-law), Licinius. The characters also face a shadowy assassin who has been sent against them. And they battle Gnostic heretics who try to prevent the Bible from coming to Rome or great churches from being built over the graves of the apostles.

FF: What is the connecting factor between the books in this series?
They have the same adventurous spirit and swashbuckling heroes, the same insights into early Christian life and worship, and the same grandeur of ancient Rome as their backdrop. Rex and Flavia continue their seemingly impossible romantic relationship, figuring it out through many obstacles.

FF: Can you explain how your academic background has contributed to the success of writing this series?
I’m a scholar of early Christianity. Most of my previous writings have been academic books and articles about the ancient church. So what I put in my stories is full of realistic detail. The reader will learn what it was really like to be an ancient Christian—not just the events but the mindset of the characters. At the same time, my primary purpose is to entertain the reader, not to teach history, so the story is a grand adventure first and foremost. Its historical realism is just a way of making it seem vivid in the reader’s mind.

FF: What do you hope readers have learned or experienced so far from this series?
I definitely hope they get swept up in a great saga and feel transported to a different time and place. And along the way, I want them to experience a form of Christianity that has a different tone or feel from today yet is recognizably the same in its worship of Jesus and the commonalities that all believers share.

FF: What are you working on next?
Book 3 of the trilogy! It centers on three amazing plotlines, all interwoven: the Council of Nicaea that gave us the Nicene Creed, the fight against heresy in Rome that denies the true Incarnation of Jesus, and the discovery of the pieces of the True Cross in Jerusalem by Empress Helena and her building of the Church of the Holy Sepulcher there.

Book Summary:
In AD 316, the Roman empire is rapidly transforming under the rule of Constantine. Where Christians once feared for their very lives, a prominent ally now presides—but evil still prowls in dark corners of the empire.
Bishop Sylvester commissions Flavia, a senator’s daughter, to take a covert petition to Constantine to erect grand basilicas in Rome and determine the canon of scripture. But he knows this is a dangerous request. Even as paganism is dying, the church has powerful enemies and they’re on the move.

Once separated by fate, Flavia and hardened warrior Rex are reunited for their perilous quest on behalf of the catholic church. Traveling by land and sea, the pair are thrown into mortal danger as they strive to free the Roman people from the tyranny of wicked rulers and forge a tenuous future for Christianity. 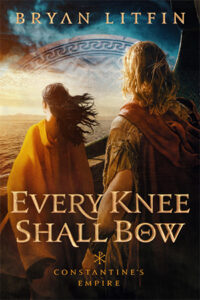 Buy Every Knee Shall Bow from the FF Store HERE!

Buy Every Knee Shall Bow from Amazon HERE!