Book Summary:
She’s a modern day damsel. He’s her self-appointed knight. Who will rescue whom?

Kylie just wants to run her café without people thinking she’s a damsel-in-distress. That proves difficult when a man claiming to be her half-brother reveals buried family trauma and forces Kylie to face the scars of her childhood.
Peter doesn’t mean to be a knight in shining armor, but as her proverbial big brother, he decides to uncover the truth about Kylie’s semi-sibling, while trying to make peace with his own mistakes.
Unearthing the past leads to a danger greater than either ever expected. In the end, who will rescue whom? 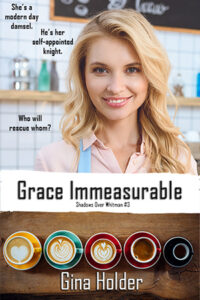