Book Summary:
She was told to never ask questions, but what about when murder is involved?

Emma Ambrose has lived a life of privilege and safety inside her father’s arms ever since her mother mysteriously disappeared when she was a girl, leaving Emma bereft and lonely.

That is before he is dragged away on accounts for murder and treason. Out of loyalty, Emma tries to follow her father’s final instructions: never leave home and never ask questions. Until she receives a letter from the powerful and intimidating – she might add – Clan Leader Summer Eyes, who forcibly demands Emma must come at once to pay back her father’s debts. Torn but left without a choice, Emma agrees to the terms. Frightened but determined, Emma makes her way to Cupala, the Capital. She is confronted with threats much more extensive than she has imagined: from political games to starvation tactics. Emma scrambles to understand the world around her with only help from a stuck-up guard.

Even amongst the turmoil, she feels the bliss of freedom for the first time in her life, and she begins to question who is the real enemy, the influential dignitaries playing their dangerous games—or her father? 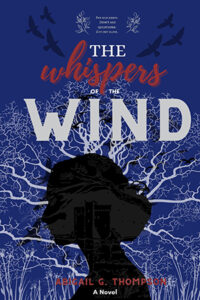 Buy The Whispers of the Wind from Amazon HERE!