The author talks about her new historical Amish romance—and why it’s never too late to seek redemption.

An award-winning romance author and member of RWA’s Honor Roll, Molly Jebber tours and speaks about Amish history and traditions. She continues her Amish Charm Bakery series with Ellie’s Redemption (Zebra). Ellie Graber is working at Amish Charm—and making good on a precious chance to reunite with her Amish community. Joel Wenger is one of the few willing to understand her. But as painful misunderstandings and a beautiful rival for Joel’s affections threaten to separate the couple for good, can they bridge the gap between distrust and faith to secure a lifetime of love? In this interview, Molly explains how even an Amish rebel can find redemption, shares what led her to set her series in this historical time and place, and reveals her favorite thing about writing Amish historical romance fiction…

Molly, Ellie’s Redemption is the second book in your Amish Charm Bakery series. What happens in this book? 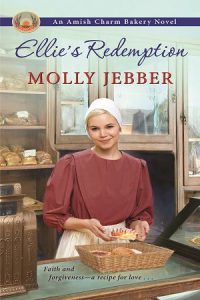 In Ellie’s Redemption, Ellie has asked forgiveness from God, family, and friends for running away, and for the danger and turmoil she brought to Charm in Liza’s Second Chance. She’s ready to redeem herself, and show her Amish community she’s serious about her commitment to God and the Amish life.

Amish men won’t court her, and gossips wag their tongues about her past to whoever will listen.

Joel Wenger, a newcomer, arrives and shows interest in her. He chooses to ignore the warnings from friends not to trust her. Unexpected visitors from Ellie’s past, Joel’s parents’ judgment of her, and Joel’s secret threaten any chance of a future they may have together. You’ll have to read the book to find out what happens!

How does this fit into the larger arc of the series?

Ellie is outspoken and courageous. She’s quick to defend her friends and family. Her experience and brush with danger in the outside world in Liza’s Second Chance taught her valuable lessons. She’s humorous, and her friends love being around her.

They respect her for returning to Charm after facing adversities in the outside world and having to contend with the constant gossips who keep her past alive. She’s friends with the main characters in the future books in this series.

Tell us about Ellie Graber and Joel Wenger. What about these two characters made you want to bring them together? 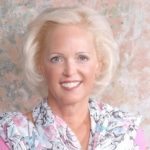 Ellie’s unlike most Amish women. She’s bold, direct, loving, and funny. Joel wouldn’t leave the Amish life for any reason. He’s loyal and committed to God. He’s kind, loving, and stubborn. He contemplates the facts before making a decision. Ellie makes snap decisions. She loves Joel’s kind heart, and she finds comfort in his stability.

Joel loves Ellie for her sense of humor, telling him what she thinks, and determination to do whatever she puts her mind to. She enriches his life. They learn from each other. But their road to love isn’t easy. Misunderstandings, prejudice, gossip, and revealed secrets threaten to ruin their courtship.

Ellie is returning to the Amish community after a time away—and now she’s home to start again. What inspired you to have Ellie go on this kind of character journey?

Ellie’s mother has died, and she chose to express her grief in anger and frustration. She ran away from the memories of her mother, but she found out this didn’t work. I chose to show that not everyone grieves the same. But Ellie didn’t abandon her faith in God, and he puts a special woman in the outside world in her life to show her the way home.

I wanted to show that even an Amish girl can rebel and get into trouble. But she can be forgiven and return and seek redemption. I show there’s consequences for her bad behavior, but rewards for her courage along the way.