Matt Mikalatos has a penchant for tackling spiritual issues from decidedly unusual angles. His YA fantasy series The Sunlit Lands kicked off with The Crescent Stone (Wander): Madeline has a terminal illness. Jason is traumatized by a tragedy in his past. When a mysterious stranger offers to heal Madeline for a price, she and Jason are swept into a strange land where their decisions carry serious consequences. With the second book on the way this summer, Matt explains the origins of the series, the challenges of writing fantasy that’s grounded in a biblical worldview, and gives us a glimpse of what comes next…

On the surface, The Crescent Stone has the sheen of “magical escapism,” but there are some very real-world themes taking place in there. What were all the influences or inspirations that led to this series?

In The Crescent Stone there are two human characters who ground us as we enter the world of magic. One is Madeline Oliver, a teenager who has a terminal disease. And the other is her good friend Jason Wu.

When I wrote this book, my best friend was going through cancer treatment. The idea of the “magical cure” made me feel sick, because it felt dishonest. But that’s what kicks off the story: A magical being from a race of creatures called the Elenil promise to heal Madeline if she will fight for them in a magic war for one year.

What Madeline and Jason quickly discover is that the world is more complicated than noble elves and depraved orcs. In fact, in the Sunlit Lands, to assume that everyone from one people group is evil (like the orcs in Tolkien, for instance) would be dangerous indeed. Jason, as an Asian American teen, brings a really different point of view on what’s going on than in some other fantasies—he’s sensitive to issues of injustice, and pretty quickly figures out what’s going on.

Madeline discovers that she may have signed on to fight for the “bad guys,” but they are also the only ones who can heal her. She has a painful decision to make. Does she allow injustice to gain her health? Or do the right thing and lose her life?

How does this book fit into the big picture of The Sunlit Lands series?

This is book one of a trilogy, with book two, The Heartwood Crown, releasing in August 2019. This book comes at a breaking point in the history of the Sunlit Lands.

There has been an unending war between the powerful Elenil and the monstrous Scim peoples. Madeline and Jason come and, by trying to do the right thing, break the balance of power. Everything is thrown into chaos, people die, rulers are toppled.

And also the world’s most amazing unicorn, Delightful Glitter Lady, makes her debut. My favorite review is probably the Kirkus review, which said, “For Narnia fans who enjoy heavy snark, this is a must-read.”

What’s the overarching theme or concept of the series?

The Sunlit Lands are extremely diverse. There are shape-shifting lizard people, blue-skinned forest people, the Elenil, and a race of night-dwelling monsters called the Scim, among others. A major theme of these books is, how do we build a just and beautiful society in the midst of such diverse points of views, cultures, and histories?

In the United States today we are battling to figure out how to do the same thing. What fiction does well is help us play out different scenarios and see what might work with problems we don’t know how to solve in the real world. My hope is that these books help move readers toward real insight on how to navigate the complexities of our society in their personal lives.

What are the challenges of creating a fantastical world with magic rules but also is grounded in a biblical worldview? 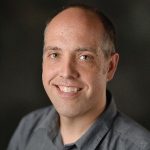 One way we get to a biblical worldview is by being completely honest in our search for truth, because Jesus is the way, the truth and the life. So even though I’m inventing people groups and magic systems and characters I want to keep asking, “If this sort of magic were real, how would it honestly function, given what we know about human beings and the world around us from what Scripture teaches?”

So, in the Sunlit Lands one of the magical systems works in a sort of zero-sum way: If I use magic to build a house faster, that means someone else will find that building their house will take longer.

The biblical worldview comes in as we start asking the sorts of questions God cares about: Is this sort of magic just or unjust? Could it be used for good in the right setting? If there is injustice, how do the people of God overcome that?

The second book comes out soon. No spoilers, but what can readers expect from The Heartwood Crown?

I’ve read The Heartwood Crown approximately thirty-seven times, and there’s a scene near the end that still makes me cry when I read it. Everyone who has read it so far told me they cried by the end.

There are some beautiful moments of friendship, loyalty, and bravery in this book. It’s also really funny. There are characters seeking revenge, seeking healing, and seeking justice. 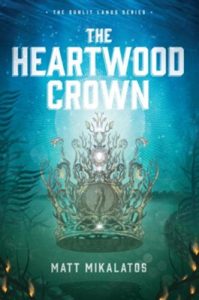