Erin Bartels is the award-winning author of We Hope for Better Things, The Words Between Us, All That We Carried, and The Girl Who Could Breathe Under Water. A two-time Christy Award finalist and winner of two 2020 WFWA Star Awards and the 2020 Michigan Notable Book Award, Erin has been a publishing professional for twenty years. Erin has explored some thought-provoking themes within the pages of her books, including forgiveness, coming-of-age, racism, abuse, sisterhood, grief, and faith. Now she takes readers on a whole new journey as she marries her love for music with her love for words in a captivating new novel.

In this interview, Erin discusses her latest book, Everything Is Just Beginning.

FF: Please provide a brief summary of your new book, Everything Is Just Beginning.
When guitarist Michael Sullivan gets kicked out of his band (and his apartment), landing a record deal seems an impossible dream. And nothing about Michael’s prospects points toward a better future. Until the invitation for a swanky New Year’s Eve party shows up in the mailbox. It’s addressed to his uncle, with whom he shares both name and living space, but his uncle is going out of town…

On the effervescent night of December 31, 1989—as the Berlin Wall is coming down, the Soviet Union is falling apart, and anything seems possible—Michael will crash a party and cross paths with the accomplished and enigmatic young heir to a fading musical dynasty, forever altering both of their futures.

FF: Everything Is Just Beginning pairs your love for music with your love for the written word. When did you first come up with the idea behind your novel?
It’s hard to say…I honestly don’t remember. There is one plot element that comes from an idea I had years ago while listening to a story on NPR about a man who did amateur paleontology out West, but it morphed and changed so much, it’s not really much like that original idea at all. There are no dinosaurs in my book.

FF: Everything Is Just Beginning addresses the underlying themes of struggle and starting over. Can you provide a hint of how this plays out in the lives of your characters?
Fundamentally, one character’s life has been nothing but struggle up to this point, while the other has had a relatively charmed and easy life. Michael meets Natalie when things are turning bad in her life, and in becoming a part of her life and her family’s, he finally gets a glimpse of how his life could be good. A lot of how everything shakes out depends upon how each character chooses to see the obstacles in front of them—as insurmountable roadblocks or as opportunities to overcome.

FF: Your two protagonists, Michael Sullivan and Natalie Wheeler, could not be more different. How do their lives intersect, and how are they able to help each other?
They come from very different backgrounds, families, experiences, and opportunities, but one thing they have in common is their love of music at a deep, feeds-your-soul level. Even within that shared passion, their talents and attitudes are different. But where one is weak, the other is strong, both in talent and in the way they support one another through difficult times. I think everyone needs a friend like that.

FF: Do you feel you can relate to any particular character in Everything Is Just Beginning?
As with my other novels, I find myself in multiple characters who represent multiple sides of my mind and personality. As a creative person, I relate to Natalie, who wants to make music that pleases her and stretches the limits of her talent. As a person who creates something for an audience, I relate to Michael, who wants to be sure what he is creating is something others will pay money for and enjoy because it delivered on its promises. When I write, I write for me, and I don’t want to lose that in trying to please an audience. Yet, without an audience, who would read what I write? It’s every writer’s and artist’s dilemma.

FF: What lessons do you hope readers can take away from your novel?
We live in a time when we are all hyper-aware and too often hyper-concerned with what others think of us. I want readers to remember that there was a time—and not so very long ago—when everyone you ever met wasn’t watching your every move, ready to pounce, to render judgment, to critique your every decision. I want readers to feel confident to make whatever art they make and live the kind of life they feel called to live. I want us all to stop worrying about what others think of us, stop working so hard to make others like us, and stop apologizing for the ways in which we are not living up to others’ often ridiculous and arbitrary expectations. In short, I hope readers come away from the reading experience with renewed confidence to be themselves.

FF: Each of your works has focused on different themes. How do you choose the themes for your novels?
Honestly, I don’t choose my themes. By that, I mean I don’t sit down to write with an agenda in mind, such as, “I’d like to teach readers to be true to themselves.” The themes appear in the process of writing the characters and the story. And once they make themselves known, I simply find more ways to enhance them and weave them into the fabric of the story.

FF: You have written dual-timeline and contemporary novels. Do you prefer one time period to another?
Every time period I have written in has its charm. I am perennially interested in how the past affects the present, so even my strictly contemporary novels feature characters and storylines that are deeply influenced and impacted by the past, whether their own or someone else’s.

FF: What are you working on next?
I am currently working on a dual-timeline story set in present-day East Lansing, Michigan, and 1880s France and Gibraltar that involves a mysterious artist ancestor, a lost painting, identity, adventure, and the limits placed on a woman’s life, whether by the society and time she lives in or by herself. It is a celebration of the art of painting and the art of seeing and presenting the self in the truest light possible. 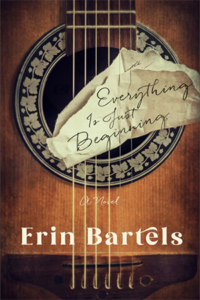