In four vivid new books, hitting shelves just in time for the new school year, beginning readers will be enriched with lessons from their favorite VeggieTales characters, while also learning the fundamentals of reading with I Can Read!’s simple text format. The books include: 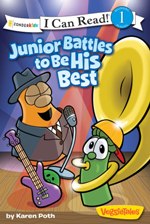 JUNIOR BATTLES TO BE HIS BEST
(Zonderkidz; September 2011; $3.99)
A Lesson in Self-Confidence
When all his friends are competing in the Battle of the Bands, Junior sits out the chance to play his tuba in front of a huge audience. He doesn’t think he’s very good. But then he sees all his pals-including Ma Mushroom and Larry and the Peas-practicing their music and realizes they sound pretty good, which only makes Junior more sad that he won’t be participating. With the help of his friends and his faith in God, Junior finds the courage to jump onto the stage and perform with his friends in a winning number. 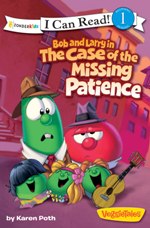 BOB AND LARRY IN THE CASE OF THE MISSING PATIENCE
(Zonderkidz; September 2011; $3.99)
A Lesson in Being Patient
Bob and Larry are on the case of the Masked Door Slammer when the Pod Squad threatens to ruin their investigation. Bob and Larry have no patience for the squad’s fun-loving nature when they’ve got real police work to do. But the Pod Squad really wants to learn from the best. In the end, Bob and Larry learn that patience to teach others yields the best teamwork. 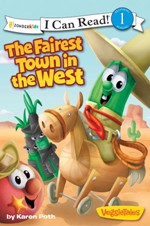 THE FAIREST TOWN IN THE WEST
(Zonderkidz; September 2011; $3.99)
A Lesson in Playing Fair
Sherriff Bob and Deputy Larry have their hands full when the Ratt Scallion gang blows into town. The gang causes trouble in the usually humble and lawful town causing local residents to start adapting to their terrible behavior. It’s up to Bob and Larry to settle the chaos, reminding both the residents and the Ratt Scallion gang that there is nothing to gain by behaving badly. 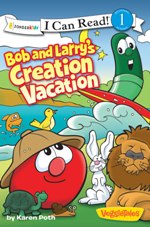 BOB AND LARRY’S CREATION VACATION
(Zonderkidz; September 2011; $3.99)
A Lesson about Creation
Bob and Larry take off for a wonderful adventure across the world so they can see all that God created live and in person. The trip reveals many of the beautiful things on Earth – beaches, blue seas and more than 28,000 types of fish. In just seven days, Bob and Larry follow the path of God, discovering all of what he was able to accomplish in one week. They even rest on the seventh day, just as God did.

With over 15 years of experience leading design teams at the Walt Disney Company, Big Idea and May Merchandising Company, Karen Poth has a thorough understanding of both the entertainment and retail industries. Specializing in product design, copywriting, character and logo development and creative marketing tactics, Karen has a proven track record of creating and building brands in a variety of platforms. Currently, Karen lives with her husband and six-year-old son in Nashville, Tenn.

ABOUT I CAN READ!:
The first I Can Read! book, Little Bear, written by Else Holmelund Minarik and illustrated by Maurice Sendak, was published in 1957 and is still cherished by young readers. Today, I Can Read! is the number one beginning reader series in the country. It features more award-winning titles, authors and illustrators than any other beginning reader series. It includes more than 200 titles for readers at five beginning reading levels. I Can Read! books have won Newbery and Caldecott Honors, and have been recognized as American Library Association Notable Children’s Books, New York Times Outstanding Children’s Books smf Parenting Best Children’s Books and have won Parenting Reading Magic Awards. icanread.com

Zonderkidz, a division of Zondervan, inspires young lives through imagination and innovation. As the leader in Christian children’s communications, it produces bestselling and award-winning Bibles, books, board books, graphic novels, audio, video and digital products that awaken the hearts and touch the souls of kids under 16 and the people who love them, from family members to educators. Zonderkidz is the publisher of the NIrV(New International Reader’s Version) Bible translation, the 3rd-grade reading level edition of the NIV that is ideal for children and those who speak English as a second language. Zonderkidz.com.

Zondervan, a HarperCollins company headquartered in Grand Rapids, Michigan, is a world leader in Christian communications and the leading Christian publishing brand. For more than 75 years, Zondervan has delivered transformational Christian experiences through general and academic resources authored by influential leaders and emerging voices, and has been honored with more Christian Book Awards than any other publisher.