Ronie Kendig is a bestselling, award-winning author, but as with most creatives, she is diversely talented. Last year she stretched her strengths from romantic suspense to epic fantasy. We are going to delve into Ronie’s creative mind, exploring where her literary journey first began and how it pivoted to the fiction she writes today. How can one creative mind straddle two different genres in such a captivating way? We’ll answer this question and more!

RELATED: 5 Authors who write more than one genre

Part 1: Storming the Castle
Suspense author Ronie Kendig is reaching out to a whole new set of readers with her epic fantasy series Abiassa’s Fire.

Part 2: Keep Us in Suspense
With her new suspense series, Ronie Kendig strikes into uncharted territory for The Tox Files

Suspense author Ronie Kendig is reaching out to a whole new set of readers with her new epic fantasy series Abiassa’s Fire. 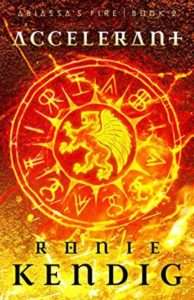 You probably know Ronie Kendig as one of your favorite romantic suspense authors. However, did you know the first book she submitted for publication 13 years ago was actually a speculative novel? Lately, Ronie has returned to her roots. In October 2015, she published her novel, Embers (Enclave), part of her Abiassa’s Fire series. And this past October, she continued the streak with her second installment, Accelerant.

In a 2014 interview with FamilyFiction, Ronie hinted that big things were ahead for her. She had just wrapped her Breed Apart trilogy (Barbour Books), which was a huge success, and she had big plans for a shift in her career. Ronie promised readers if they took the journey with her, they would not regret it. “It will still have my rapid-fire style and pacing.” And she did not disappoint. In fact, Embers was short-listed for a 2016 INSPY Award.

When asked about the shift from suspense to speculative, Ronie commented, “One of my favorite parts of speculative fiction is growing its world and laws, as well as how the characters move/fit into that unique backdrop.” The inspiration for the series concept came to her while she was watching BBC’s show “Merlin.” She was frustrated with one of the characters and had the question, “What if…” Her response was the Abiassa’s Fire series.

Ronie created a world she calls Primera, which has a sun like ours, but two moons. Primera also has nine kingdoms, many rulers, alliances, foreign lands and a god-figure known as Abiassa. “The Nine Kingdoms is an alliance of nine countries who have come together under the rule of the Fire King, the most powerful accelerant who is tasked by Abiassa to protect her people.” Although the Nine Kingdoms have been in a peaceful alliance for centuries, a violent dark force laying waste to the kingdoms is threatening that peace. The powerful and omnipotent Poied Dyrth is using his evil forces in the name of Sirdar of Tharqniss.

Our hero, the son of the Fire King, emerges as an unlikely warrior against Poied Dyrth. Haegan Cellar has been crippled since youth, but he “suddenly finds himself restored—temporarily—and thrust from all he knows and loves. On his journey to find permanent healing and reconciliation with his family, he’s joined by a group of unlikely youth and pursued by his own father.”

There are obvious parallels in the book that translate to the Christian faith. Haegan seeks restoration, peace and healing while trying to stop the evil forces that wage war. And, of course, Abiassa is very similar to our God. Ronie notes she crafted the character “with direct parallels to our own God, but before Christ came to earth.”

No matter what Ronie is writing, romantic suspense or sci-fi, she says there’s always a message. “In my stories I always try to write hope. No matter what you are dealing with there is hope in Christ. That is what I want to share ultimately with my readers.” And she delivers this hope with her iconic, fast-paced style, keeping readers blazing through the pages.

KEEP US IN SUSPENSE 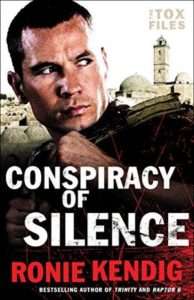 Ronie Kendig may have other irons in the fire with her speculative series Abiassa’s Fire, but she knows what her main fan base wants—heart-pounding romantic suspense. Ronie uses her writing abilities as well as her researching skills to launch fans into a new journey with her latest romantic suspense series, The Tox Files. This series fits in with her previous works in the same genre, but as fans will see, it is unlike anything she’s ever done.

Ronie has long fostered a love for ancient sites. When a new idea piqued her interest, she dove in headfirst and created her Tox Files series, which is a marriage of her previous paramilitary fiction projects and her affinity for ancient sites. By Ronie’s own admission, this series will be unlike anything she has written before. “First, the series will continuously deploy the former Special Forces team, Wraith, to deal with emergencies, and second, those emergencies will be centered around ancient artifacts that have biblical connections and modern-day implications.”

The star of The Tox Files is Cole “Tox” Russel, who is part of the Special Forces team Ronie mentioned. Ronie believes fans will love this series because of its “Indiana Jones-type adventures.” Tox must sort fact from myth and science from the supernatural as he and his team are sent on various missions throughout the series.

Readers are first introduced to Tox in the series prequel novella, The Warrior’s Seal (Bethany). The President of the United States has been kidnapped on a goodwill tour. Could an artifact releasing a deadly toxin be to blame for wiping out an entire village and can the terrorist behind all of this be stopped? Tox and his team are sent to rescue the President before it’s too late and find the answers they need to restore peace.

This past October, the first full-length novel in The Tox Files hit bookstores. In Conspiracy of Silence, Tox is pulled from his life of anonymity back into the world of Special Forces. This time he is tasked with tracing the origin of a centuries-old disease, which has been released and is posing a major threat. Tox teams up with FBI Agent Kasey Cortes as they go on a continent-hopping journey to find answers. Their clues lead them to an ancient secret society, which clearly wants to remain hidden.

RT Book Reviews praised Conspiracy of Silence, “Once again, Kendig blows fans away with her action-packed military novel that includes love, romance, betrayal, death and everything in between.” Publisher’s Weekly has also heralded the series stating, “Kendig fans will love this opening novel in her new series.”

Of course fans can expect more books in The Tox Files series, which is Ronie’s style. Three full-length books are planned for the series. The second installment will hit bookstores fall 2017.