“Through the power of story, [readers] can grow that faith and maturity through exploring the spiritual arcs of the characters.” 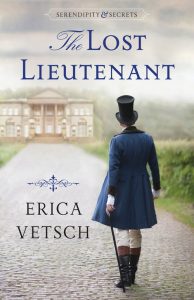 Who doesn’t need to be swept away to another place and time every now and then? After all, there’s never a bad time for a good story. For readers ready to take a trip back to early nineteenth-century England, The Lost Lieutenant (Kregel Publications) by Erica Vetsch is a perfect means of transport.

The first release in Vetsch’s Serendipity & Secrets series, The Lost Lieutenant tells the story of Evan Eldridge and Diana Seaton. Evan never set out to be a war hero—he just wanted to fight Napoleon for the future of his country. After being injured while saving another man on the battlefield, all he really wants is to get back to his regiment. Instead, his act of bravery leads to him being made the Earl of Whitelock. When the life you save is dear to the Prince Regent, things can change in a hurry, and you don’t say no to the Prince Regent.

Lady Diana Seaton has little say over anything in her life. She finds herself in an untenable position trying to keep her promise to her deceased sister while also obeying her controlling father. It’s debutant season in London, and Diana’s father intends to marry her off to the man of his choosing—one who will go along with his less than honorable plans. She finds herself between the proverbial rock and a hard place. When the Prince Regent steps in with a plan all his own, the members of the Seaton family must fall in line, because it’s worth repeating, you don’t say no to the Prince Regent. Will the arranged marriage to the new Earl of Whitelock make matters better or worse for Diana?

While Evan has a new title, a manor house in shambles, and a stranger for a bride, all thrust upon him by a grateful ruler, what he doesn’t have are all his memories. Traumatized as a result of his wounds and bravery on the battlefield, Evan knows there’s something he can’t quite remember. He also knows that whatever it is, it’s important, dangerous—and if he doesn’t recall it in time, it will jeopardize not only his marriage but someone’s very life.

While Vetsch is well-known for her many historical books set in the American West, The Lost Lieutenant is her first venture into Regency fiction. For readers who may be new to the genre and unfamiliar with the historical term, the Regency covers the time period of 1811–1820 in England when the Prince of Wales stepped in as a substitute monarch (Prince Regent) for King George III, who was deemed unfit to rule. 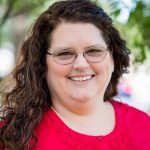 “If there is one thing my family and friends know about me, it is that I always want to be learning and researching new historical topics. I was having difficulty coming up with something fresh and interesting, where I could really dive into the research,” Vetsch confesses. “I had been reading quite a bit of Regency, thanks to some recommendations from an author friend, and the more I read, the more I realized I didn’t know many specifics about the era. Suddenly, there were so many avenues to explore, like the aristocracy, the clothing, the amusements, the Napoleonic Wars, and much more! My imagination sparked, and I was hooked!”

She hopes readers will be too.

Christian fiction fans can be assured they will find elements of faith in the story as well. Along with the characters, they will see that God doesn’t make mistakes, He is sovereign, and He is good.

“I love that through the power of story, God can use what we write and reach the people He wants to reach and teach them what He has for them,” shares Vetsch. “Just as every reader brings their own imagination to a story when they read it, so too they bring their faith, their history, their experiences into the spiritual thread of the story. They start from where they currently are in their faith journey, and through the power of story, they can grow that faith and maturity through exploring the spiritual arcs of the characters.”

The Lost Lieutenant is a story of falling in love while learning to trust. Trust God. Trust your heart. Trust your spouse. Readers who enjoy Julie Klassen, Carolyn Miller, and Kristi Ann Hunter will love diving into this brand-new Regency series filled with suspense, aristocratic struggles, and a firm foundation of faith. The second installment of the Serendipity & Secrets series, The Gentleman Spy, releases on July 28, 2020, to be followed by The Indebted Earl in 2021.

Praise for The Lost Lieutenant

“An enchanting tale, The Lost Lieutenant was quick to capture my heart and engage my hopes. A wounded hero meeting a heroine on the run is always a perfect recipe for romance; throw in a spy for good measure, and you’ve got a winner from Erica Vetsch! This is a Regency novel that will have fans begging for more.”
~ Jaime Jo Wright, Christy Award-winner of The House on Foster Hill

“Original, engaging, and oh so romantic, The Lost Lieutenant is a delightful tale sure to satisfy Regency fans and inspirational readers alike. Evan, a battle-scarred war hero, earns his place alongside the leading men of Austen and Heyer, and Diana is a heroine you’ll relate to and root for as she falls in love with her unintended earl. Rich historical details, authentic faith elements, and a dash of intrigue combine in this winning first installment of the Serendipity & Secrets series, certain to gain a permanent place on your shelf . . . and in your heart.”
~ Amanda Barratt, author of My Dearest Dietrich

Erica Vetsch is a New York Times best-selling and ACFW Carol Award–winning author. She is a transplanted Kansan now living in Minnesota with her husband, who she claims is both her total opposite and soul mate. She loves Jesus, history, romance, and sports. When she’s not writing fiction, she’s planning her next trip to a history museum and cheering on her Kansas Jayhawks. A self-described history geek, she has been planning her first research trip to England.