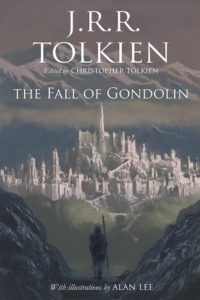 J.R.R. Tolkien’s The Fall of Gondolin, which the author had described as “the first real story” set in Middle-earth, is to be published as a stand-alone book for the first time. Edited by his son Christopher, the tale of a reluctant hero defending a city was written in 1917 while Tolkien was in hospital recovering from service during World War One.

As reported by several news outlets, including the BBC and the Guardian, The Fall of Gondolin will be the second “new” Tolkien work to be released in two years, following the release of Beren and Lúthien in May 2017. The news of another new Tolkien book comes as a surprise, given that the author’s son Christopher, 93, described Beren and Lúthien as “(presumptively) my last book in the long series of editions of my father’s writings.”

Prior to his retirement last year, Christopher spent years organizing his father’s unpublished writings. He edited and posthumously published such Tolkien works as The Silmarillion and The Children of Hurin. The only Middle-earth-based novels to be published by J.R.R. Tolkien in his lifetime were The Hobbit and The Lord of the Rings trilogy. He died in 1973.

The Fall of Gondolin is described as chronicling the ancient history of Middle-earth before the events in The Lord of the Rings.

Tolkien expert John Garth says The Fall of Gondolin contains Tolkien’s “biggest battle narrative outside of The Lord of the Rings.”