The author shares the present-day impact of a heartbreaking chapter in history.

Selected among BOOKLIST’S Top 10 for two years running, Lisa Wingate writes novels that Publisher’s Weekly calls “Masterful” and ForeWord Magazine refers to as “Filled with lyrical prose, hope, and healing.” Her novels have garnered or been short-listed for many awards, including the Pat Conroy Southern Book Prize, the Oklahoma Book Award, the Utah Library Award, the LORIES Best Fiction Award, The Carol Award, the Christy Award, Family Fiction’s Top 10, RT Booklover’s Reviewer’s Choice Award, and others.

Her novel The Book of Lost Friends (Ballantine Books) offers the dramatic story of three young women searching for family amid the destruction of the post–Civil War South, and of a modern-day teacher who learns of their story and its vital connection to her students’ lives.

In this interview, Lisa shares the historical background of her dual-time novel, explains the significance of the novel’s present-day setting, and reveals how her faith impacts her storytelling.

Lisa, in your novel, Book of Lost Friends, you’re bringing to life actual “Lost Friends” advertisements from after the Civil War. How did you discover their existence? 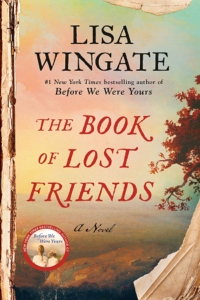 The spark that became Hannie’s and Benny’s story came to me in the most modern of ways—via an email from a book lover who’d just spent time with the Foss family while reading Before We Were Yours. She thought there was another, similar, piece of history I should know about.

As a volunteer with The Historic New Orleans Collection, she’d been entering database information gleaned from advertisements well over a century old. The goal of the project was to preserve the history of the “Lost Friends” column, and to make it accessible to genealogical and historical researchers via the Internet. But the data-entry volunteer saw more than just research material.

“There is a story in each one of these ads,” she wrote in her note to me. “Their constant love of family and their continued search for loved ones, some they had not seen in over 40 years.”

She attached several photographs of the Lost Friends ads to the email. She wanted me to see them in their original form, in the blotchy newsprint of old hand-crank printing presses, faded by time, but still bearing their heartbreaking yet hopeful messages.

How difficult was it to gather them or find them? How much did your background as a journalist come into play here?

The same reader friend directed me to the “Lost Friends” database, and over 2500 original ads, now digitized on the Internet. There, I tumbled down a rabbit hole of lives long gone, stories and emotions and yearning encapsulated in words that had, until recently, been hidden away in dusty library file cabinets and university archives.

Names that survived perhaps nowhere beyond these desperate pleas of formerly enslaved people, once written in makeshift classrooms, at kitchen tables, and in church halls . . . then sent forth on steam trains and mail wagons, on riverboats and in the saddlebags of rural mail carriers, destined for the remote outposts of a growing country. Far and wide, the missives journeyed, carried on wings of hope.

In their heyday, the “Lost Friends” ads, published in the Southwestern Christian Advocate, a Methodist newspaper, went out to nearly five hundred preachers, eight hundred post offices, and more than four thousand subscription-holders. The column header requested that pastors read the contents from their pulpits to spread the word of those seeking the missing.

It also implored those whose searches had ended in success to report back to the newspaper, so that the news might be used to encourage others. The “Lost Friends” advertisements were the equivalent of an ingenious nineteenth-century social media platform, a means of reaching the hinterlands of a divided, troubled, and fractious country still struggling to find itself in the aftermath of war.

Other aspects of the story involved much online research, a location trip through East Texas and South Louisiana, personal interviews, and the study of old books and maps to determine the routes and types of transportation Hannie and her companions would have been used in the 1870s to travel from South Louisiana to the frontiers of Texas.

Hannie’s story was developed not from history books, but from the voices of lived experience—from original diaries, letters, and books written during the time period, as well as an extensive study of the WPA slave narratives, in which Roosevelt’s Federal Writers interviewed the last survivors of slavery to preserve their stories.

The ideas behind The Book of Lost Friends are so heartbreaking. What was it about these particular three girls that inspired you to write their story? Was any of it based on real life events?

Hannie began speaking to me after I read an ad placed by a woman named Caroline Flowers. I knew Hannie’s fictional situation would, in some ways, be directed by the life of Caroline Flowers, but that Hannie’s search would lead her to strike off on a quest.

Her journey would be life-altering, an odyssey of sorts. It would change her forever, redirecting her future. I knew she would set off on her journey with two unlikely traveling companions, each with her own secrets and her own reasons for embarking on a perilous trip to Texas.