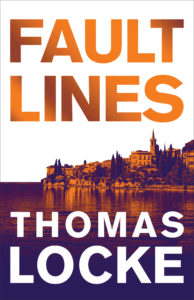 As a security expert, Charlie Hazard is all about taking control of the situation. There isn’t much that can throw Charlie Hazard off balance. Charlie is that “all strength” type of guy who can’t be shaken. That is until a striking mystery woman walks into his life with one intense request: “Follow me. NOW!” He figures this is probably just another risk-containment job, but what he doesn’t know is that this mystery woman is about to shake his world.

The stunning Dr. Gabriella Speciale, an experimental psychologist, draws him into a secret psychological project and his risk parameters are shattered. Every move brings him to the edge of one fault line after another, and Charlie struggles to stay clear of a maelstrom of entangled dangers.  Knowing little more than her name, Charlie leaves his post as a guard at the Satellite Beach community center for what he thinks is just another risk-containment job. But Dr. Gabriella has far more in store for him than protection duty–if the two of them survive the test.

Reese Clawson relishes her work at the Combine and all the perks and power that come with it–including the ability to manipulate perceptions. But the Combine never anticipated this mind-shifting technology. If Gabriella’s experiments succeed, the Combine would be destroyed. And Reese will never allow that to happen.

The research team abandons their lab on the Florida coast and flees to a mountain refuge in Italy. The battles in Charlie’s mind are overtaken by real life attacks. He must grapple with the daunting realization that a conspiracy is taking hold on both internal and external levels. Can Gabriella be trusted, or is she just part of the scheme?

What if reality is only the edge of possibility? Leave behind your assumptions about the way the world works, and race along the unknown corridors of human consciousness in Fault Lines.

ABOUT THE AUTHOR
Thomas Locke is a pseudonym for Davis Bunn, an award-winning novelist with worldwide sales of seven million copies in twenty languages. Davis divides his time between Oxford and Florida and holds a lifelong passion for speculative stories. He is the author of Emissary and Merchant of Alyss in the Legends of the Realm series, as well as Trial Run and Flash Point in the Fault Lines series. Learn more at www.tlocke.com.