Samuel Parker captivated readers with his brisk, raw style of writing in both Purgatory Road and Coldwater. Now he offers readers a haunting tale of a father and son, rescue and destruction, and the high cost of second chances in his new book, Border Son (Revell): The dusty and dangerous streets of a Mexican border town are brought into sharp focus in this suspenseful reimagining of the Prodigal Son story. In this interview, Samuel shares with us his inspiration, research and issues that contributed to this novel.

How did you come up with the plot for Border Son? 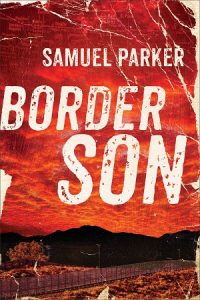 I was kicking around the idea of wanting to do a story set in Juarez, and then the movie Sicario came out, which was brilliant. So I shelved the idea for a few years, because you simply can’t compete with Taylor Sheridan. Ha! Then, I came back to it and thought it would be a good setting to tell a version of the Prodigal Son.

You did some very interesting research when writing Border Son. What did your research entailed?

I spent some time in El Paso doing research, but it was a short jaunt over to Columbus, New Mexico, and then a walk into Puerto Palomas, Mexico, that sealed the deal for setting. The desert fascinates me to no end, so getting out and walking amongst the rock and the dust is what gets my mind going.

Library Journal stated that fans of Stephen King and Dean Koontz will enjoy your style of writing. Do you agree with this statement and how would you characterize your writing?

I heard another reader say my style reminds them of old Dean Koontz, so that seems to be a theme. I like stripped-down storytelling, no filler. Get to the tale and throw everything else out. In the way that this mirrors King and Koontz, I would agree.

Some of the issues that you touch upon in your book are covered frequently in the news. Did you take this into account when writing Border Son?

I follow several reporters and writers who know exponentially more about our southern border than I will ever know. I am fascinated by the area, the environment, and the people. I wanted to write a story set in that part of the country but was hesitant for several reasons. Retelling the Prodigal Son story was a way I thought I could slip into the environment.

What do you hope readers will gain from reading your novel?

I hope readers walk away from my novel thinking about how we treat people and our duty to love people, even when it’s not in our best interest to do so.