Jeffrey Wilson has at one time worked as an actor, a firefighter, a paramedic, a jet pilot, a diving instructor, a Naval Officer, and a Vascular and Trauma Surgeon. He also served numerous tours in Iraq and Afghanistan as a Navy combat surgeon, deploying with an East Coast-based SEAL Team as part of a Joint Special Operations Task Force. The co-author of several #1-selling thrillers, he goes solo for his military thriller War Torn. Based on personal experiences, War Torn details a young man’s crisis of faith after a tour of combat duty in Afghanistan turns tragic. In this interview, Jeffrey shares the facts behind the fiction, the challenges for a Christian author writing about violent events, and the ministerial heart behind the project…

Jeffrey, War Torn is based on your personal experiences. How much of this book is “what happened” vs you wrote a story “inspired” by certain real events? 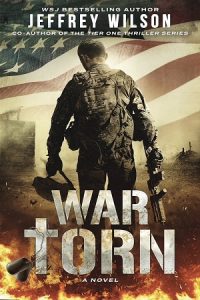 For sure, I’d have to say that this is inspired much more than what happened in terms of the story events. My own deployments and the events leading to my own crisis of faith are pretty different from those that Jake experiences in War Torn.

I intentionally wrote Jake as the “Everyman” kind of soldier, because it was important to me that he be relatable to very diverse cross section of war time experience. Anyone who has suffered loss or seen death or taken a life in a war zone can related to the things Jake experiences.

Had I written this from the perspective an elite Navy SEAL, as I do in my other works such as the Tier One series, it may have been more exciting and entertaining, but it would have resonated with a much smaller population of war fighters.

The feelings of loss, the guilt, the questions about where God is in the horrors or war, why a loving God could allow such things—these are more universal, and for certain I drew heavily on my personal experiences in this part of the book than in the earlier chapters.

My wife Wendy was a huge part of my finding my way back to God, and her own of dealing with all that we went through heavily informs the struggles of Rachel in the book. And I could never have come close to writing the story of the pastors in the book without close counsel from my good friends Pastor Chris Bonham and Pastor Craig Altman.

So, there are a lot of true stories and emotions wrapped up in the story of Jake and Rachel, as well as Craig and Chris, but the details of the story are just that, a story designed to resonate broadly with those who have their own stories and struggles.

You’ve written a number of thrillers as a co-author. What inspired you to write War Torn yourself? What are the pros and cons of writing vs. co-writing? 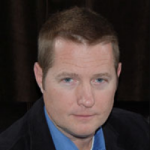 Brian and Andrews and I have certainly enjoyed considerable success as the co-author team for the bestselling Tier One series as Andrews and Wilson. That experience, and my close friendship with Brian, has been incredible, and both of us are certainly best known for that collaboration.

But we both wrote independently before and continue to do so now. The secret to our partnership in the Tier One series, the Nick Foley series, and the projects we have coming out over the next year, is that we both bring something to the table that the other can’t do as well alone. War Torn is my story, and not something that Brian could really help me with.

I will tell you it’s a real challenge now to write without Brian. He is an amazing and insightful writer that pushes me to be a better writer. We do less and less independent from each other these days, but this was a story I needed to tell on my own. If you have the write writing partner, as I truly do, writing as a team is amazing, and easy. The only advantage of writing solo for me now is if there is a story, such as this one, that I can only tell alone.

As an author, what lessons or traits did you carry from your co-authors into your own book?

There is no question that writing with Brian has made me a better writer. I hope he would say the same. The key to our partnership is there’s no ego and no pride. I know my strengths and my weaknesses, and so does he. When there’s something that he’s better at, I trust him to help craft that part of the book and make it even better, and vice versa.

But as you’re alluding to, after a time, you get better and improve your areas of weakness. Working with Brian has made me much more attentive to details of my prose and I think that’s helped me a lot. While I wrote War Torn on my own, there is still a ton of the Andrews-Wilson brand in the end product.

Click thru to discover the resistance War Torn had from Christian AND general market book publishers!