Novelist, screenwriter, and tennis pro James Markert draws upon his degree in history for his novel The Angels’ Share (Thomas Nelson), a story of fathers and sons, of young romance, of revenge and redemption, and the mystery of miracles…

What inspired this story? 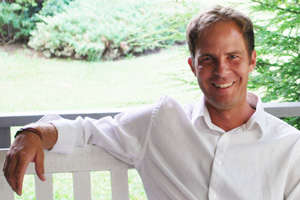 I came up with the title before the story. While touring the Jim Beam bourbon distillery with my wife, we entered the rick house, where thousands of bourbon barrels were aging. The tour guide told us the wonderfully thick aroma we’d all noticed upon entering—hints of fruit and aged wood, vanilla, caramel, butterscotch and more—was called “the angels’ share.” She explained when bourbon ages and temperatures rise and fall, pulling whiskey in and out of the charred wood, the liquid is naturally flavored.

Over time, some evaporates and permeates the air—this is the distillery’s offering to the angels.  In turn, the angels keep the distillery free of fire. I knew then and there  I wanted to write a novel called  The Angels’ Share.

Loving history as I do, Prohibition and the Great Depression jumped out at me. I imagined a potter’s field situated next to a closed-down distillery, where the homeless were buried daily, and no one cared—except the McFee family, who were still mourning their own loss. The idea of one of my characters—the Potter’s Field Christ—was born. He’s a homeless man who, because of the way he lived and treated others, was thought by many of his brethren to be anything but ordinary.

Are any of the pieces pulled  from reality?

All of the characters are fictional, which is why I refer to this and some of my other books as commercial fiction set during historical times. I’d be lying if I said some of the character traits didn’t resemble my own. Here are a couple of pieces I pulled from real life:

The Old Forester brand is prominently featured in the book because they survived Prohibition as one of a handful of bourbons used for medicinal purposes.

The old coke ovens, where some of the homeless stayed along the river, were real.

What three words would you use to describe this book and why? 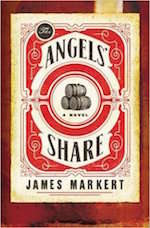 Gritty: It’s not all peaches and cream. There’s some violence and drinking and heartbreak, but I like to peel off the layers and slowly reveal the beauty and hope beneath it all. When I wrote The Angels’ Share, as far as a tone fit to be emulated, I had the Coen Brothers’ O Brother, Where Art Thou? in mind.

Suspenseful: Any time you have a bad guy named Tommy “The Bat” Borduchi on the lam, you better keep the pages turning.

Redemption: Everyone looks for a way to clear that debt, and Barley McFee, with his many secrets, is no different.

Since this novel takes place right after prohibition has ended, what sort of research did you conduct?

I visited about ten distilleries, and that “Bourbon Trail” research is ongoing. I’d imagine these quaint distilleries looked and smelled like back in time. I read about how the great gangsters skirted Prohibition laws. I researched the Great War and various signs of the times, not to mention the introduction of Barley McFee’s La-Z Boy chair. I learned plenty about my beloved city of Louisville, where gangsters like Al Capone used to hang out at the Seelbach Hotel playing cards, and where hidden gems like Rose Island’s amusement park were popular family attractions.