Author Jaime Jo Wright’s novels include The House on Foster Hill for which she won a Christy Award, and the Carol Award-winning The Reckoning at Gossamer Pond. In our interview for The Haunting at Bonaventure Circus (Bethany House Publishers) Jamie tells us why she chose the circus as the setting for her latest story, shares some fascinating details in her research, and explains why she likes unusual heroes.

What inspired you to choose the circus as a backdrop for your fifth novel? 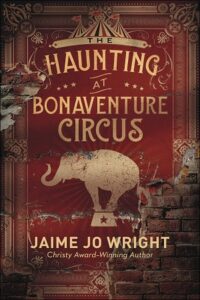 I absolutely love the circus. I grew up in the shadows of the Ringling Bros. Circus where it originated in small-town Baraboo, WI, and where it wintered at the end of every circus season. Today, it’s still a place filled with circus memorabilia, a museum complete with an active Big Top, elephants, and a merry-go-round.

The calliope strains echo in the valley throughout the summertime, and as a child I loved sitting on the riverbank, watching the elephants enjoy a summer afternoon bath. The circus is a deep part of my roots, so framing a story around its rich history was something I’d always dreamt of doing.

Are any of the historic buildings and locations mentioned in your novel real places?

Yes! In fact, the entire layout of the circus city in the novel is based on the original circus grounds of the Ringling Bros. My novel, of course, fictionalizes this as Bonaventure Circus. The train depot remains today as an abandoned building with bricked-in windows. The elephant house stands as well, and I’ve walked the training ring under its roof, reminiscing of those days long ago when it was filled with elephants, the smell of coal heating the building, and the pungent smell of manure.

The circus grounds stretched over acre upon acre and encapsulated the train and its tracks. And yes, they did walk the elephants from the circus quarters to the downtown square for regular routine exercise.

Your present-day heroine, Chandler Faulk, struggles with an autoimmune disease diagnosis and refers to it as Lyme disease. Why did you choose this malady for your heroine as opposed to one more well-known? 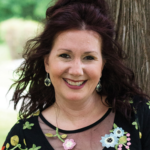 Honestly, I chose it because it’s something I’m extremely familiar with. I received a diagnosis of chronic Lyme disease a couple of years ago after a long struggle with non-epileptic seizures, bouts of complete loss of awareness, and chronic weakness. I poured many of my own personal struggles, both emotionally and physically, into Chandler’s journey.

Some of your heroes are very unconventional. Your present-day hero, Hank Titus, has a history of growing up in the foster-care system, a criminal record, and isn’t what one might consider clean-cut. Where did the inspiration for Hank come from?

Hank was begging to be written. I have a weak spot for the gruff-and-rough hero. Hank’s story of delinquent teen years, his struggles with the law, and finding acceptance of himself was important to me, because we don’t all have pasts that include only small bruises. I was anxious to show an analogy of redemption in Hank, but also that redemption doesn’t necessarily smooth the rough edges.

What’s the spiritual theme you drew on for Bonaventure Circus, and why?

Asking for help. It doesn’t seem like an obvious spiritual theme, but so often we bully through our trials, even our day-to-day troubles, with the pride of an “I’ve got this” attitude. We rarely do have it all together, and yet asking for help is insurmountable for many of us.

Having someone fight on our behalf can be an amazing relief, not to mention a form of rescue that leaves us grappling to hold on to our rescuer. I wanted to show that seeking help, admitting our weaknesses, and allowing others to come alongside us is a form of humility and wisdom all rolled into one.

Also, the important element that seeking and accepting help doesn’t mean that we’ve surrendered our strength. Sometimes reaching out for assistance is strength. I wanted to give a nod to the Scripture that states, “For when I am weak, then I am strong,” and emphasize the truth of our eternal Rescuer who will always fight on our behalf.

Welcome to Bonaventure Circus, where misfits go to hide.

In 1928, the Bonaventure Circus has become a refuge for many, but Pippa Ripley was rejected from its inner circle as a baby and is no longer content to leave the reason for that rejection unquestioned. When she receives mysterious messages from someone called the “Watchman,” she is determined to find him and the connection to her birth. As Pippa’s search leads her to a man seeking justice for his murdered sister and evidence that a serial killer has been haunting the circus train, she must decide if uncovering her roots is worth putting herself directly in the path of the killer.

Decades later, an old circus train depot’s future hangs in the balance–it will either be torn down or preserved for historical importance, and its fate rests on Realtor Chandler Faulk’s shoulders. As she dives deep into the depot’s history, she’s also balancing a newly diagnosed disease and the pressures of single motherhood. When she discovers clues to unsolved murders of the past, Chandler is pulled into a story far darker and more haunting than even an abandoned train depot could portend.