Suspense author DiAnn Mills creates action-packed, suspense-filled novels that have won her two Christy Awards, and been finalists for the RITA, Daphne du Maurier, Inspirational Reader’s Choice, and Carol Award contests. She launched her new FBI Rapid Response series with Burden of Proof (Tyndale House): FBI Hostage Negotiator April Ramos becomes a hostage herself in this race to find out the truth before the real murderer gets away. In this interview, DiAnn shares the research behind the book, reveals the most difficult part of writing about the FBI’s Critical Incident Response Group, and explains the role that faith plays in the novel…

What kind of research went into writing Burden of Proof? 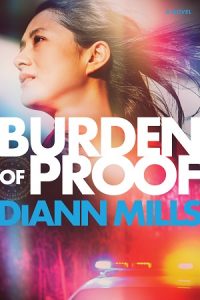 I interviewed an FBI special agent who is a hostage negotiator (HN). His collateral duty was SWAT. He repeatedly emphasized the need for active listening skills so the person in crisis believes the HN cares about him/her. The HN offers understanding. Normally the negotiation is not face-to-face, because the HN is part of a six-to-eight-person support team.

A degree in psychology is good, but not necessary. Special training takes place at Quantico. We talked for two hours, all valuable information that I used for my character. Incredibly interesting!

I’ve often been in East Texas, but in writing Burden of Proof, I spent a day there detailing the community where the story is set, noting the homes, billboards, habits, hobbies, culture, restaurants, etc.

What was the most difficult aspect of writing about the FBI Critical Incident Response Group?

In Burden of Proof, my heroine is a special agent who specializes in hostage negotiation, but her collateral role is public corruption.

The writing portion challenged me in the details. I had pages of interview questions and answers, but how my characters thought, responded to life, and moved forward according to their training proved difficult.

I constantly posed the question: Am I being true to the character and true to his/her role?

What role does faith play in the story?

My hero must work through grief on various levels. His wife died of cancer after giving birth to their daughter. The hero allowed anger and resentment to separate him from a stronger relationship with God.

When he is falsely accused of murdering his best friend, and his daughter is kidnapped, the powerful emotions shake but do not destroy him. While he wants his relationship with God restored, he wrestles with the sovereignty of God. He reaches a point where he must choose between surrendering to God or living life his way.

My heroine grew up in church, but she never understood or thought she needed a relationship with God. Her god was performance, but it never satisfied her for very long. Through seeing others around her with powerful faith, she is drawn to surrendering her life to the one true God.

Your characters must make extremely difficult and potentially dangerous decisions, both for themselves and for others. What variables, do you believe, drive most of our decisions?

I believe our decisions are based on our priorities. What we deem as most important surfaces from faith, career, culture, education, life experiences, personality type, and a huge list of factors that make up each individual’s uniqueness. Selfishness and greed have no place in a hero’s or heroine’s characteristics.

As you were crafting the characters featured in Burden of Proof, which one did you personally relate to the most? Which character surprised you the most?

April dealt with perfectionism, and so do I. She maintained discipline and organization and followed the rules and FBI protocol until she realized her self-worth wasn’t based on accomplishments.

Jason surprised me with how he protected Billie. He knew helping her escape and stay hidden from Willis put his own life in jeopardy.

Why do you believe it is so important to craft strong female characters in your novels?

I believe women are the grass roots of any culture. They lay the foundation of each generation as nurturers, either as mothers or as role models. The strength of any society is established in the ability of women to influence others positively.