The suspense author reveals how her latest paramilitary thrillers are inspired by a lost book of the Bible.

The award-winning author of some two-dozen novels, Ronie Kendig grew up an army brat, and now she and her Army-veteran husband live a short train ride from New York City with their children and a retired military working dog. Spinning off of her Tox Files series, she kicks off a brand-new series, The Book of the Wars.

The first title in the new series is Storm Rising (Bethany House): When an ancient text is unearthed, a former Navy SEAL must form an uneasy alliance with a notorious Bulgarian operative to thwart disaster. But does this ancient book of prophecy hold the answers to saving the world—or predict its destruction?

Ronie, Storm Rising is another of your page-turners that crosses into different sectors of the genre. How do YOU describe it? Military thriller? Archaeological thriller? Spy thriller? 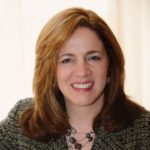 I’ve had so much fun mingling all these different aspects into Storm Rising, but I simply call it a paramilitary thriller because that is pretty all-encompassing.

What inspired you to mix all these different elements together?

I’m always looking for a way to challenge myself but also a way to do something new. Adding the archaeological component, something inspired by a late-night Facebook post by veteran and author Brad Taylor, seemed a natural segue. I did this as well with the bestselling series, The Tox Files, and had a lot of fun with it—and apparently so did my readers!

What can you tell us about former Navy SEAL Leif Metcalfe? What made you want to tell this character’s story? 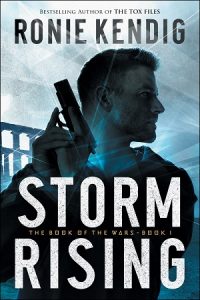 Leif Metcalfe showed up in The Tox Files, so when I was looking at bringing a lead hero into The Book of the Wars, he was a natural candidate. In addition, he’s the little brother of much-beloved character Canyon Metcalfe from my 2012 Christy Award Winner, Wolfsbane. There was a lot of love for Canyon, and I was excited to explore what life was like for Leif, the little brother of a “perfect” brother.

How much of this story required research vs it was familiar territory for you? What type of research did you do?

After ten years writing military/paramilitary, I found this a natural progression for my writing. There was a decent amount of research involved in the archaeological and biblical aspects of the story, but since the Book of the Wars of the Lord in the book of Numbers is a book lost to humanity, I was able to go in any direction I needed the story to go. But the research for cloud-seeding and storm generation was pretty intensive and cerebral. It’s amazing how many countries are really experimenting and working with this technology.

What can readers expect from the Book of the Wars series?

The concept of the book of the wars of the Lord (the artifact, not the series) is that it predicts wars that haven’t yet happened. So across this three-book series, Leif and his team will set themselves between evil and the innocent. But this is also very much Leif’s journey with an overarching plot that relates directly to his past. The next two books will both release in 2020, so this is a little faster pace with my suspense titles than I’ve done in the last few years.