The suspense author explains how the main character in her latest novel can stop crimes before they happen.

With more than one million books sold, Elizabeth Goddard is the bestselling, award-winning author of more than forty romance novels and counting—including the romantic mystery The Camera Never Lies, which was a 2011 Carol Award winner. She plunges readers into a fast-paced, high-stakes story of honor, forgiveness, and justice with Don’t Keep Silent (Revell), the latest volume in her Uncommon Justice series: Investigative reporter Rae Burke will do anything to find her missing sister-in-law, even if it means facing former DEA agent Liam McKade, a man who almost lost his life saving hers. In this interview, Elizabeth talks about the overarching theme of the series, compares and contrasts the occupations of her main characters, and challenges readers to be a “voice of truth.”

Elizabeth, Don’t Keep Silent is the third novel in your Uncommon Justice series. Is there an overarching theme or idea you were exploring in the set?

Each of my characters in the series sets off on a journey of self-discovery as they try to find out what purpose they serve, where they fit in this world and—most importantly—what place to call home. This theme isn’t overt for all the characters, but instead an internal struggle. As they work together, the heart of the series for my characters is to right the wrongs they see in the world, one issue at a time—delivering…Uncommon Justice. A few additional themes include forgiveness, second chances, and the belief that God is our rock.

Your main characters hold jobs that involve procedure and precision: In Never Let Go, Willow is a forensic genealogist; in Always Look Twice, Harper is a crime scene photographer; and in Don’t Keep Silent, Rae is an investigative reporter. During your research, did any of the details of the jobs surprise you? (Did you enjoy the research/what was it like?)

I loved every moment of the research and found diving into each of these careers fascinating. For my research for Never Let Go I relied on family experience—years of visiting cemeteries and church archives in search of genealogical connections, and then supplemented that knowledge with research on forensic genealogy.

I loved reading about how some families are finding missing family members through the use of forensic genealogy. One method that surprised me was the use of age progression to learn if an ancestor as a child in a photograph was the same person as an older adult in another photograph.

In Always Look Twice, I hadn’t known just how involved crime scene photography could be or all the tools required to map out the crime scene including the close shots and the wide shots. I couldn’t include all of those details in my story, of course, because it would get too technical.

The biggest surprise for me was that crime scene photographers, like other first responders, can often suffer with PTSD, and that’s how I portray my character. I completely understand how that can happen because I struggle with the simple act of researching the dark side of crime.

In Don’t Keep Silent, I knew that my character would be an investigative reporter but I wanted her to be special so I learned about war zone journalists going into the trenches. Some have been injured and others have died—shot or bombed—and from that exploration Rae’s character was born.

Though it’s not so much a surprise but rather just mind-boggling to learn the many avenues reporters use to find their data, and the use of knowledge bases to compile that data, as well as the enormous volume of information shifted through and fact-checked. I modeled one particular character (Rae’s research assistant) after a National Geographic research assistant—so much more goes into well-written exposés than most of us know.

Did any of these jobs seem particularly interesting or scary? (Did you have a favorite out of the three?)

The scariest of the three jobs to me is Rae’s job of investigative reporting. She is the kind of reporter to imbed herself in enemy territory in order to expose the injustice and free those held captive by criminals, putting others’ lives before her own. I think this job is by far the most dangerous, but it’s also my favorite job of the three, because it’s a way to be the voice for the voiceless and make a real difference in the world.

An investigative reporter can potentially stop crime and death before it happens or at least prevent illegal or heinous activity from continuing. The title, Don’t Keep Silent, is absolutely perfect for this theme.

Please share with us a brief synopsis of Don’t Keep Silent.

Investigative Reporter Rae Burke wants nothing more than to follow in her award-winning journalist father’s footsteps. He stood up for the voiceless by exposing the evils in the world—and that got him killed. Rae is willing to go into the darkest places to find and expose the truth.

Now she’s in a race against time to find her missing sister-in-law, and she’ll go anywhere, even if it means facing Liam McKade, a former DEA agent who almost lost his life to save hers, and asking for his help. As their search ramps up, the dangers of their shared past begin to close in on them.

Was there a particular aspect to Don’t Keep Silent that compelled you to tell Rae and Liam’s story? (What drew you to their story?)

I love reunion romances especially where betrayal must be overcome with forgiveness. After the worst has happened—how do you build trust? How do you forgive and move forward? I was drawn to Rae and Liam’s backstory and wanted to further explore their past work together to discover the truth about a particular crime organization.

I wanted to know more about how the investigation imploded and nearly killed Liam—that, due to Rae’s betrayal. Rae and Liam are both passionate about their efforts to shine light in the darkness—and this is what connects them. They’re both willing to sacrifice everything. Readers will see glimpses of their backstory as it’s slowly revealed throughout Don’t Keep Silent.

Liam McKade is the third McKade brother to be featured in the Uncommon Justice series. How is he similar to his brothers? How is he different?

Like his brothers, Liam has a good heart. Also like his brothers, he escaped Wyoming for a while but finds himself drawn back to the home ranch just to get grounded again. He loves his brothers but at the same time needs his space.

He has a brooding demeanor and has experienced the darker side of life as an undercover DEA agent. He has come home, only to find that he can’t feel at home anywhere.

Rae and Liam have a complicated past. Without giving away spoilers, what can you tell us about their relationship?

They are two of a kind—both on the same mission in life but using different methods. Liam had been attempting to shine light in the dark places in his undercover work, and Rae had been digging much too close to Liam’s case, also wanting to expose the truth. Their passion and determination to make a difference led them on a collision course, for which they are both recovering on many levels.

Which character was the most challenging to write?

Liam was the biggest challenge for me. I’ve “known” him for a long time since he showed up—at least in thought—in Never Let Go, book one in the Uncommon Justice series. Then he has his own POV in Always Look Twice, book two.

In Don’t Keep Silent, he finally gets his own story. I wanted to stay true to the Liam I met as I got to know him better through the course of writing this story, and at the same time, Liam needed his own space to grow and be his own “person.”

What do you hope readers take away from reading Don’t Keep Silent?

From experience, I know readers will often take away something I hadn’t considered during the writing process, which is always wonderful to hear about. For me, the big points in this story are about going the extra lengths to expose evil and how we can do that if we speak up for those who can’t speak for themselves. We should be a light in the darkness and the voice of truth in a world of lies. 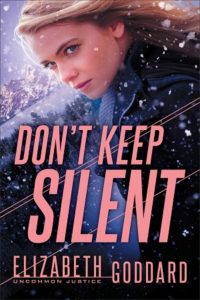 Investigative reporter Rae Burke will do anything to find her missing sister-in-law, even if it means facing Liam McKade, a man who almost lost his life saving hers. A former DEA agent, Liam thought he could find peace at his Wyoming ranch, but he just doesn’t feel at home anywhere anymore. When the reporter who blew his cover on an important investigation inserts herself back into his life, he’s less than thrilled. But Rae’s keen investigative skills have led her down the right path–and directly into the dragon’s mouth—leaving Liam no choice but to protect her. As the danger increases, the past they both tried to flee catches up to them, along with the feelings they once had for each other.

Buy the book from our store!