Fans of riveting legal suspense should check out the latest thriller from lawyer-turned-novelist Todd M. Johnson, Fatal Trust (Bethany House). A decades-old theft case leaves a lawyer scrambling for his very life. In this interview, Todd shares the real-life events that inspired the novel, the secret origins of his character names, and the spiritual themes woven throughout the novel. 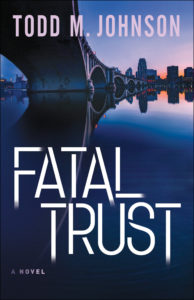 What was your inspiration for Fatal Trust?

While Fatal Trust is my third novel, it’s my first book not based on a case that I or a partner handled in my real-life practice. The story was inspired by a combination of elements: my attending a Norman Rockwell art exhibition back when I was in law school, which was robbed months later—a robbery that has never been solved; an interest in the history of organized crime in the Twin Cities through the 1960s; and an interest in exploring how actions have consequences, for ourselves and for the people around us.

I believe this is part of the spiritual fabric of our world, although sometimes we don’t appreciate the origin of the consequences we face or the loving care of God in helping us to overcome them.

What Christian themes did you explore in Fatal Trust?

A central theme is that our actions really do have consequences. The events and characters’ choices in the novel speak toward the idea that, whether intended or not, consequences come as a result of our choices and they carry a ripple effect that touches those around us. I believe this is foundational to the world God created, particularly in its fallen state. I also believe that even if we don’t plan for or foresee the consequences ourselves, part of God’s genius is the way he plants the seeds to bring about the solutions to those consequences, and usually before we even realize it.

A significant part of the story involves landmarks in and around the Twin Cities. How did you select the landmarks?

I moved to Minnesota when I was ten years old and have, with a few stints elsewhere, lived in the Twin Cities ever since. Most of the places I selected were either those I thought had significance or places that have been important in my life. These include the State Fair Grounds where I’ve attended dozens of fairs with friends and family; the protagonist Ian Wells’s apartment, located where my wife and I first resided after getting married; Hennepin Avenue with its storied past and still a focal point for Minneapolis; the Mississippi and Stone Arch Bridge and the Guthrie Theater overlooking the river.

Other landmarks include Summit Avenue in St. Paul, the childhood neighborhood of F. Scott Fitzgerald. Fitzgerald holds a special place in my heart because, like Fitzgerald, I also attended Princeton University and actually belonged to the club (Cottage Club) where he wrote This Side of Paradise–and from which he was ultimately expelled!

I have posted a “tour map” on my website, where quotes from the story are placed alongside photographs of these landmarks. For the State Fair and Guthrie pictures, my daughter and I visited some of the locations, and she took the photos.

The end of the story links to your first novel The Deposit Slip. What’s the significance of this?

Fatal Trust ends with a linkup between its characters and the main characters from The Deposit Slip. It’s my intention to write a third novel that brings these two together to form a loose trilogy. Each of the books ends with matters unresolved. The Deposit Slip concludes with an assassin still at large, the family of a deceased lawyer unaware of the true circumstances of his death, and the lawyers who could seek revenge wind up destroyed by the story’s events.

Without giving away the plot of Fatal Trust, this too ends with matters unresolved—including favors owed by the characters who could exact a price from them. It’s my intent that the surviving characters from both novels will face the intersection of these unresolved issues and with serious consequences.

How do you go about selecting the characters’ names for your novels?

Many of the names are chosen simply because I find them interesting. I keep a list of names I think are evocative for future books. I have also reached out to friends and family to ask if they’d like me to name characters after them, with the understanding that those characters carry no intentional resemblance to them. It is purely to have fun with people I know, and the answer has always been a wholehearted “yes”—with one great exception. My wife has forbidden me to name any characters after her in my books to date, though I’m still working on her. But one of the characters in The Deposit Slip bears my daughter’s middle name, Erin, and the protagonist in Fatal Trust, Ian, bears my son’s name.